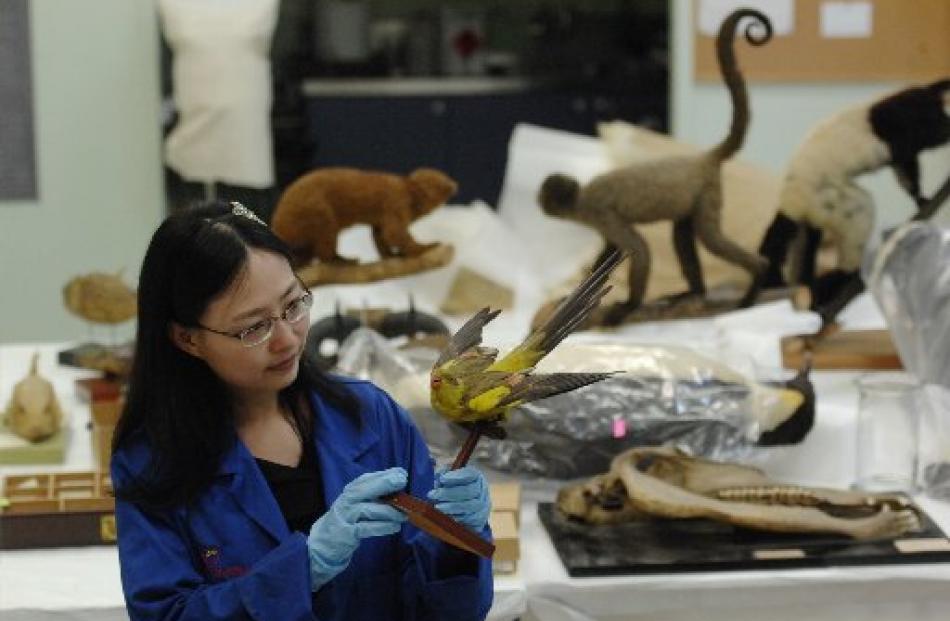 Delphi Fang, who heads the communication and collaboration section at the Shanghai Science and Technology Museum, holds an Australian regent parrot, which will soon become part of a new staircase display linked to the Otago Museum's Animal Attic. Photo...

Delphi Fang, of the Shanghai Science and Technology Museum, has become the first person to work at the Otago Museum under a series of staff exchange agreements signed with overseas museums.

Ms Fang, who heads the communication and collaboration section at the Shanghai museum, began work at the Otago Museum last week and will continue until June 26.

She has already undertaken some art work and administrative duties, and will soon take part in a major "refreshment" exercise involving the museum's Animal Attic gallery.

Opened in 1878, this gallery will close to the public on April 22 and reopen on June 21 after a major revamp, which will include extensive repainting and installation of new interpretive panels. The gallery's distinctive Victorian atmosphere will be retained.

A new feature will be the display of a series of interesting animals, including a colourful Australian regent parrot - previously held in storage - in a stairwell leading to the gallery.

Ms Fang was honoured to be the first staff exchange participant at the Otago Museum and was greatly enjoying her work at the museum.

Otago Museum marketing co-ordinator Juliet Pierce said Ms Fang had already shown herself a valued member of the Otago team and was helping translate text for Chinese language brochures being developed to cater to the growing numbers of Chinese visitors.

The staff exchange agreement with the Shanghai institution was signed last July.