Mr Shaw was one of several politicians at the University of Otago Clubs and Socs Day yesterday.

In between chatting with students, he told the Otago Daily Times feedback had been positive so far, particularly around the party’s recently launched Poverty Action Plan.

But the "vast majority" of people had not really been thinking about the election as they had been preoccupied with other things.

Recent polls have the party hovering around the 6% mark, although historically it performs lower than polling results on election day.

Mr Shaw said he was not concerned about the current level of support, but was certainly not complacent about how many would vote Green.

"During the last campaign we were having a very challenging time of it precisely at this moment in the cycle, we were polling under the 5% threshold, yet on election night we came in at 6.2%." 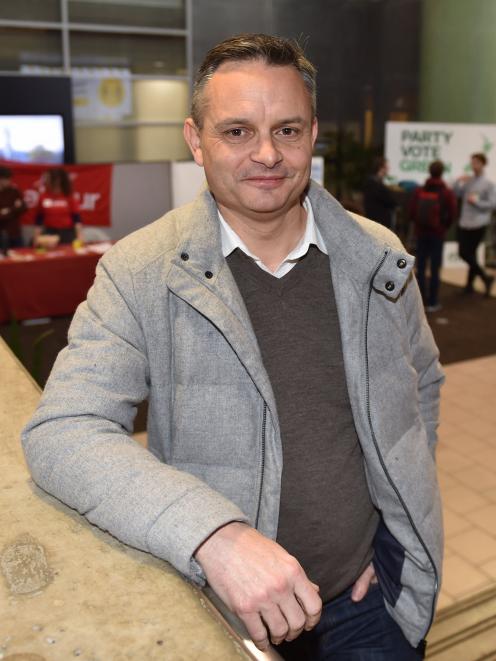 While Dunedin was traditionally a high performing electorate for the party, he was not expecting a significant number of voters to drift away from Labour and Dr Clark after his recent scandals and subsequent resignation as Health Minister.

"I think most voters distinguish personalities from parties," he said.

"I don’t think David’s moving out of the health policy will have much of an impact, no."

He was, however, much tougher on disgraced Clutha Southland MP Hamish Walker, who yesterday said he would step down at the election after sending confidential details of Covid-19 patients to media.

Describing Mr Walker’s actions as "incredibly unscrupulous", Mr Shaw said it was entirely appropriate for him to step down.

"You have to hope that it’s an isolated incident, you really do."

The greens will be scratching to get any votes after the performance of Dunedin's mayor and his band of teammates. They have singularly proven themselves to be totally out of their depth and only interested in extreme views.
Dunedin doesn't need any more damage from the greens.