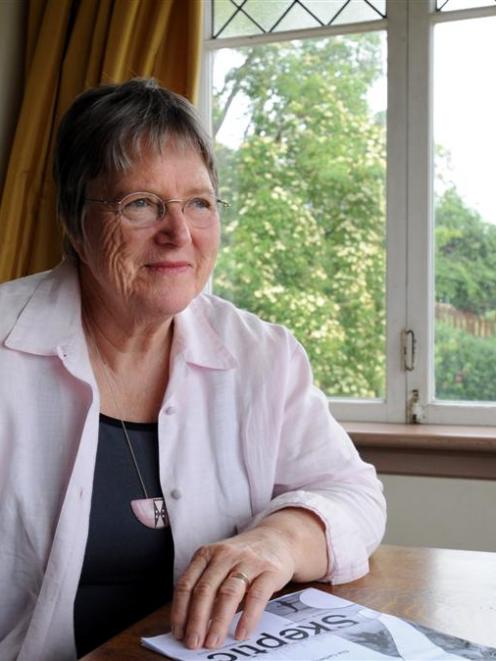 Author Lynley Hood at her Dunedin home yesterday. Photo by Gregor Richardson.
Award-winning Dunedin author Lynley Hood is losing one of her most important tools - her eyesight - and wants to help other people suffering visual impairment.

"I was reading in bed and my left eye got blurry, so I thought, `Right, time to go to sleep'.

"But, when I woke up in the morning, to my dismay, it was still blurry.

"I'd lost my central vision very suddenly and permanently," she said yesterday.

"Since then, the vision in my right eye has deteriorated.

"It was a shock. Your head starts to spin."

Dr Hood is a widely published author, writer and playwright, who won the 1989 Wattie Book Award and 2002 Montana Medal for non-fiction.

She was the 1991 University of Otago Robert Burns Fellow and was awarded a doctorate of literature by the university in 2003.

She is also a longtime writer's advocate serving as the national vice-president of Pen NZ, contributing to New Zealand and international literary festivals and establishing the Dunedin Writers' Walk.

"It affects me with practical things like reading and writing.

"I can read a few pages, but then it's like the phantom book snatcher is at my elbow and he takes it away.

"Even to get around.

"Driving is much more stressful and you stick to familiar routes," she said.

"It was emotionally shattering.

"The amount of information you get through your eyes is probably 70% or more, compared with our other senses.

"But there's nowhere to turn.

"The Federation of the Blind won't help people who aren't legally blind.

"They don't want to know you.

"There are 81,500 adults and 13,200 children in New Zealand who are legally blind or have a sight impairment that can't be corrected with glasses or contacts.

"Yet, only 11,504 people meet the foundation's registration requirements, so 80% of people aren't being helped.

"You just want the information you need, whether it's for a new mobile or a microwave.

"I put new kitchen lighting in before Christmas and I had to find someone with a lux meter, so I could work out what the best lighting was.

"I'd have thought someone would have come up with a checklist of what to do if it does happen.

"There's a page in the telephone book on what to do in case of a volcanic eruption, but nothing for people affected by visual loss.

"I rang everybody I could think of - Age Concern, the Health and Disability Commission and my MP.

"They all either said, `Have you tried the Foundation of the Blind?' or `Yes. There's a real gap there'."

The first meeting is at 1.30pm on February 19 in the RNZFB Yates Room, on the corner of Hillside Rd and Law St.