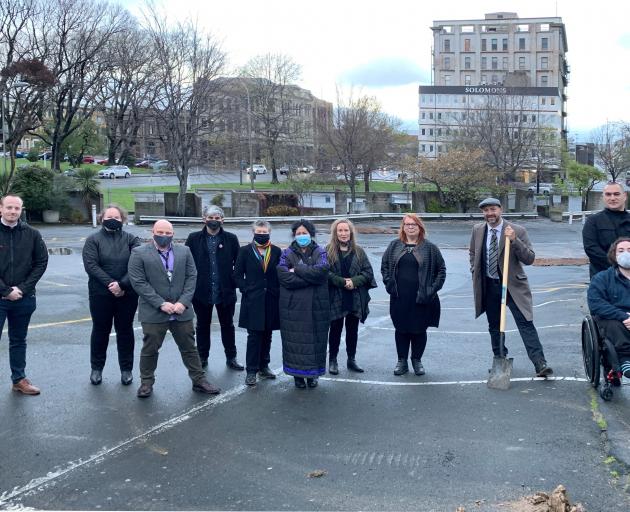 Ngai Tahu Property, ACC and Dunedin City Council representatives gather at a dawn ceremony yesterday ahead of construction of a four-level building in Dowling St, central Dunedin. PHOTO: SUPPLIED
The new ACC office space to be built in Dunedin is to be known as Otepoti, in keeping with the site’s history.

"This was a place where mauri, natural life force was once intact and where our people would arrive from paddling up the river of Otakou and haul their waka ashore," Te Runanga o Otakou chairwoman Rachel Wesley said.

The Dowling St building site in central Dunedin was originally part of the Otakou foreshore named Otepoti, she said.

Mana whenua blessed the site at a dawn ceremony yesterday, ahead of construction getting under way before the end of the year.

Te Runanga o Otakou and Kati Huirapa ki Puketeraki announced they had gifted the name Otepoti to the new development.

The first sod was turned and Dunedin Mayor Aaron Hawkins was among the representatives who gave speeches.

The development is a 50:50 joint venture between Ngai Tahu Property and ACC, which will be the tenant.

ACC will lease the building for 20 years.

ACC acting chief executive Mike Tully said staff would be brought together from four sites in Dunedin to work at the new base.

It could have capacity for 650 employees, he said.

"The building will be a market-leading and highly energy-efficient working environment," he said.

"This development will incorporate sustainability in line with Ngai Tahu iwi values."

Mr Hawkins said the joint venture supported the retention of a major employer in the city, "and provides for an expression of our mana whenua stories in a way that is rare in our built environment".

"The fact that it will reflect back at the statue of Queen Victoria is particularly poetic," he said.

"I’d also like to acknowledge the work of the late Tahu Potiki, who was instrumental in getting this project off the ground."