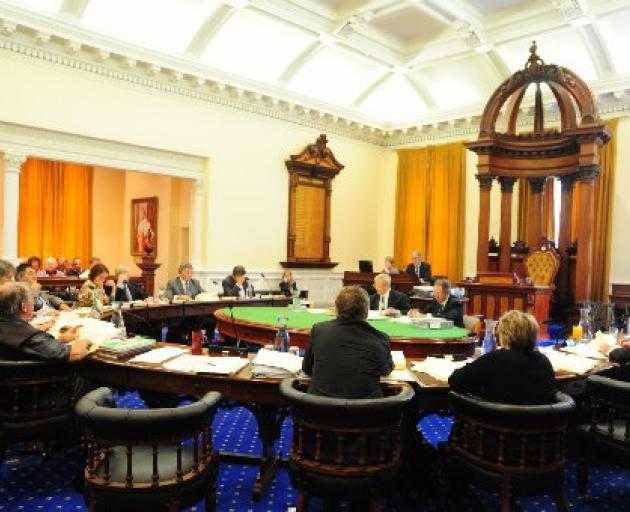 After a marathon Dunedin City Council meeting yesterday in front of a packed public gallery, councillors voted by a substantial majority - 12-2 - to ‘‘commit'' to the Carisbrook Stadium Trust's plan for the project in Awatea St.

While the project was given approval, an extensive list of conditions allows the council to opt out.

The decision delighted trust chairman Malcolm Farry, who said after the meeting there was ‘‘absolutely no doubt'' the project would proceed. ‘‘It's absolutely what we needed. It had to be ‘Yes' or ‘No','' Mr Farry said.

He was not concerned by the list of conditions, most of which were similar to conditions set by the council last year.

They were ‘‘milestones'' along the way. ‘‘We will deal with those,'' he said.

The next stage for the trust was to launch a private sector fund-raising programme immediately after Easter for the $45.5 million required. That would be the ‘‘real test'' of private and corporate sector backing.

It was by no means clear earlier in the finance and strategy committee's debate that the council would come anywhere near the consensus it finally achieved. After a long debate, councillors appeared tied 7-7.

Pro-stadium councillors argued that Dunedin needed boldness to follow in the footsteps of its forebears who built a city that punched above its weight.

But others, including the Greater Dunedin grouping of Crs Chris Staynes, Kate Wilson and Dave Cull, said the risks of building the $188 million stadium were too great and the economic climate was not right.

They were backed by Crs Fliss Butcher and Teresa Stevenson, with Cr Colin Weatherall completing the opposition.

Cr Cull foreshadowed a motion that would have shelved the project and given chief executive Jim Harland the job of approaching the Otago Rugby Football Union to discuss a minimum upgrade of Carisbrook for the 2011 Rugby World Cup.

With the vote obviously close, committee chairman Cr Richard Walls told the meeting: ‘‘With my heart I would vote for this, but my head tells me we can't afford it at the moment''.

His vote against the project would have resulted in a seven-all deadlock, leaving the special meeting of the council that followed to decide the issue. There, Mayor Peter Chin would have had the casting vote.

What followed was a period of horse-trading when a series of amendments was considered to break the deadlock.

Cr Weatherall, who earlier argued: ‘‘My heart and head agree; I can't support the motion'', asked how much funding the council could find to ease the burden on ratepayers. Cr John Bezett suggested setting the amount at $20 million.

The meeting had heard earlier from council finance and corporate support general manager Athol Stephens that funding of between $20 million and $40 million would have ‘‘a pronounced effect'' on the council's budget, which would have been stretched close to the limit otherwise.

Cr Staynes said he would support the Bezett amendment, and Cr Cull said it addressed ‘‘some of the concerns I have''.

Cr Wilson suggested another amendment that put the onus on the trust to raise funds for interest on any loans it raised, and included a condition to ensure further council funding should not come from the city's holding company.

The amendments were enough to change the minds of Cr Staynes and Cr Weatherall, and, with Cr Walls supporting, the final committee vote for the motion was 10 - 4.

When the special council meeting was held to ratify the vote, the majority approving proceeding with the project increased to 12-2, with only Crs Butcher and Stevenson continuing their opposition.