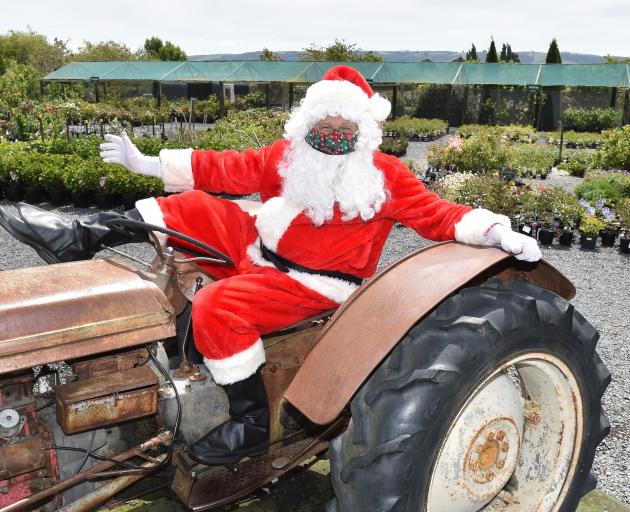 Santa Claus will be cool as a cucumber this year when he meets Taieri children to hear their Christmas wish lists at Wal’s Plant Land. PHOTO: GREGOR RICHARDSON
Traditionally, tricky children are what gets Santa a bit hot and bothered at this time of year.

But yesterday, it was the 20degC temperatures at Wal’s Plant Land on the Taieri Plain, and wearing a mask over his big white beard that was steaming up his spectacles.

"It would be cooler if I could just plait or weave my beard into a mask, but the rules say otherwise, so I’m sticking with that," he said.

"It’s not going to be an easy Christmas.

If there is one thing Santa (also known as Kevin Lilley) is good at, it is problem solving.

To deal with the overheating and fogging up of glasses, he has set himself up right in front of an air conditioning vent.

With that problem solved, he is now ready to be jolly for the long queues of children who will be lining up to ask for Christmas prezzies.

"Elfies" could be taken with Santa and his sleigh, but it was preferred they be taken by the professional photographer, he said.

"It will be a bit different this year because I’ll be a bit further away from the young ones, with the social distancing thing, but it will still be great fun," he said.

Head elf and Wal’s sales manager Michelle Lightfoot said Santa would be available between 9.30am and 4pm for the next three weekends and some days in between.

There would also be Pet Paw-trait Family sessions between 3pm and 6pm on December 8, 15 and 22, she said.