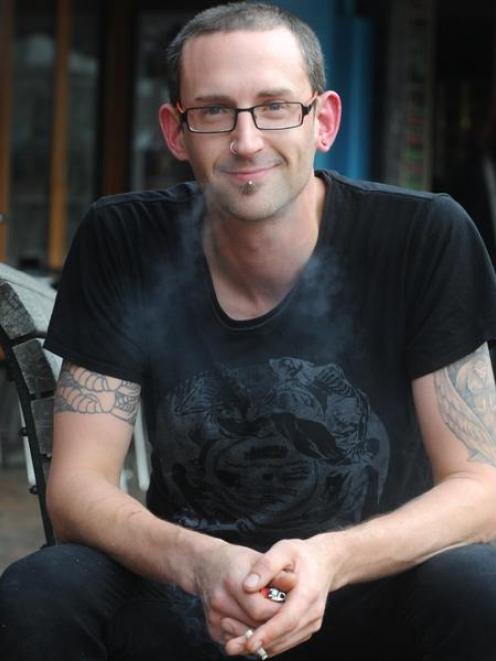 Stevo Duncan, of Dunedin, does not think the Government's tax hike on tobacco will have its intended effect. Photo by Craig Baxter.
A 40% excise tax increase on tobacco over the next four years will turn some smokers to crime, Dunedin people say.

The 10% increase on January 1 each year for the next four years was announced yesterday.

Associate Health Minister Tariana Turia said it, and spending $20 million over the next four years on a new Pathway to Smoke-Free 2025 programme, would help deter young people from taking up smoking and encourage smokers to quit.

The increases will result in the price of an average pack of 20 cigarettes reaching more than $20 by 2016, which would have a "major impact" as they came on top of a 40% increase since April 2010.

"We know that for every 10% increase in the price, tobacco consumption falls about 5%," Mrs Turia said.

However, while Dunedin smoker Stevo Duncan praised the Government for its "good effort to try to make New Zealand smokefree", he also believed it would create a tobacco black market.

The increases would impact on those on lower incomes, "depending on how addicted they are".

Esther Powell, also of Dunedin, agreed, saying tax increases would just "increase crime and poverty" as "people will still find a way to smoke" and more people would take to buying duty-free tobacco.

"I think the Government is quite wrong in trying to control what people do in their private lives. Leave us smokers alone.

"The alcohol issue is more of a problem than smokers."

On the other hand, Prof Janet Hoek, of the University of Otago marketing department, said it was "great that the Government has taken this step", but also believed it could have been stronger.

"We know that price is the most powerful policy lever, so obviously the additional increase in price is going to provide further stimulus to smokers ... and move them closer to making a quit attempt and successfully becoming smokefree."

She was also interested in finding out more about the new smokefree programme, as quitting resources needed to be "as easily available to smokers as cigarettes and tobacco products are now".

Tobacco: the incentives
• 10% increase on January 1 every year for next four years. Increases in addition to the annual inflation-indexed increases.
• Pack of 20 cigarettes will go from about $14.50 to more than $20 by 2016.
• Each 10% increase expected to cut smoking population by 5%.
• $20 million going to Pathway to Smoke-Free 2025 for programmes to discourage smoking uptake and help smokers quit.