'There will be huge fallout' 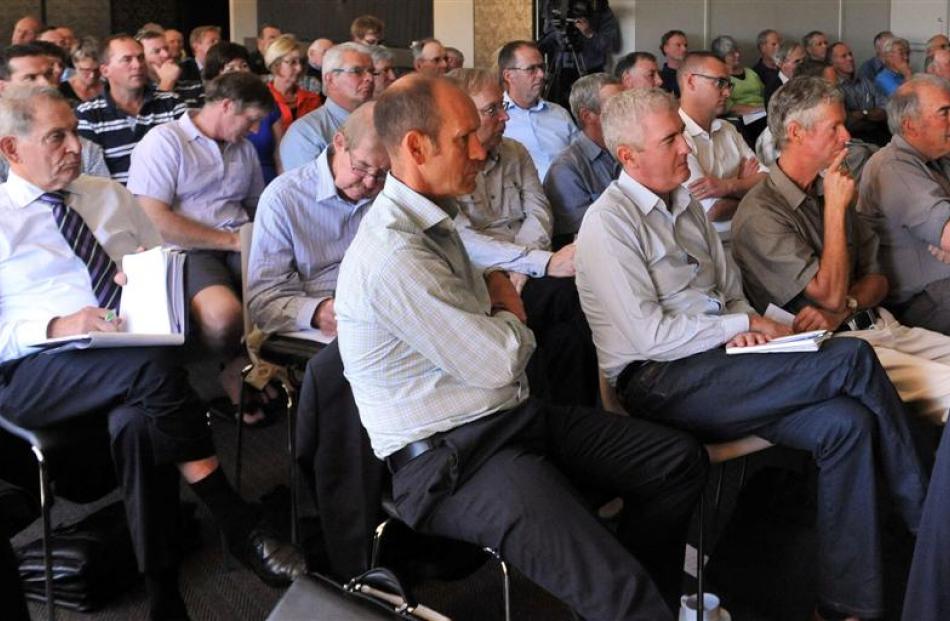 Scenes from yesterday's meeting in Gore, organised by the Southern Texel Breeders Association, to discuss AgResearch's decision to cut jobs from the Invermay campus. 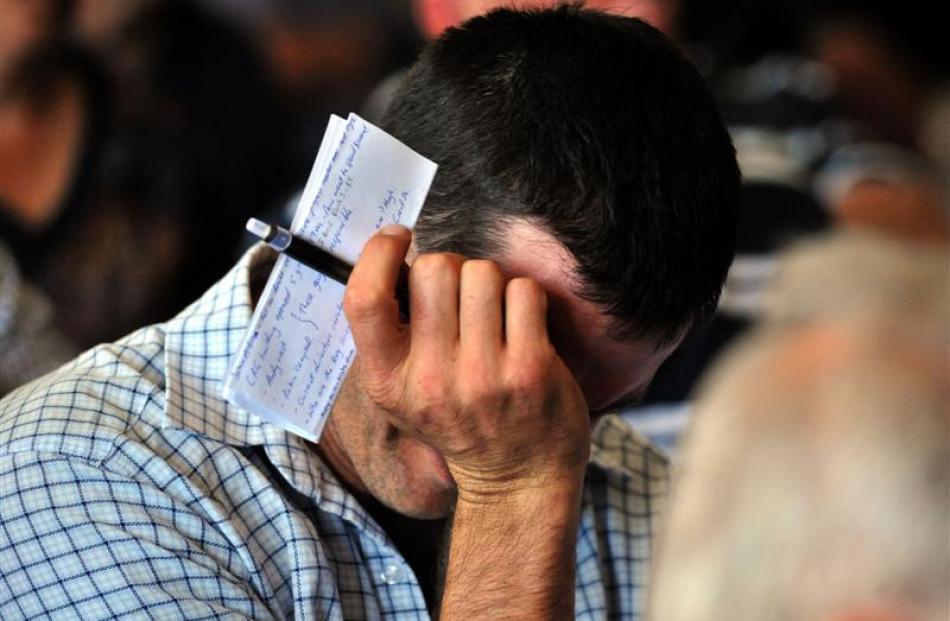 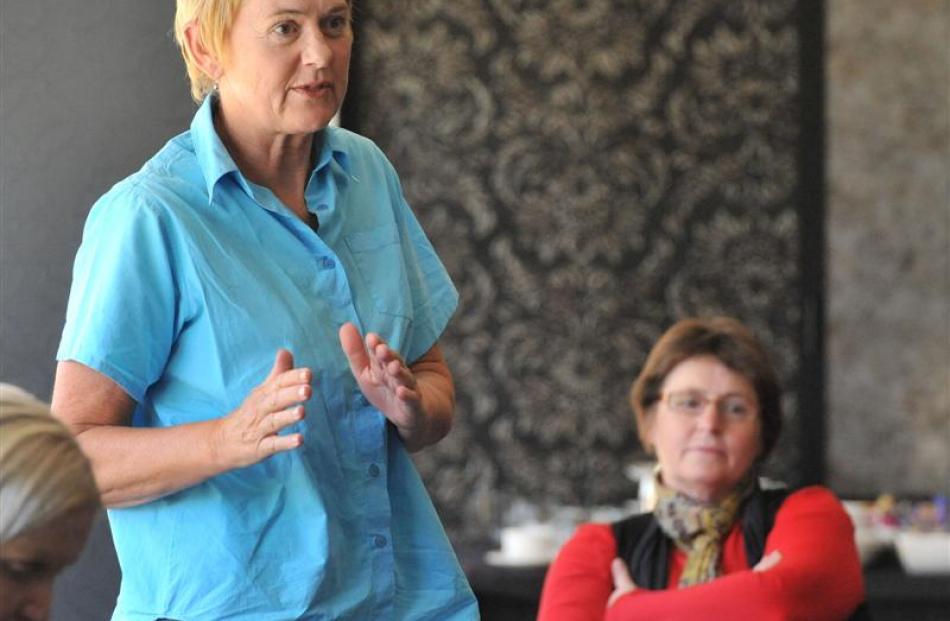 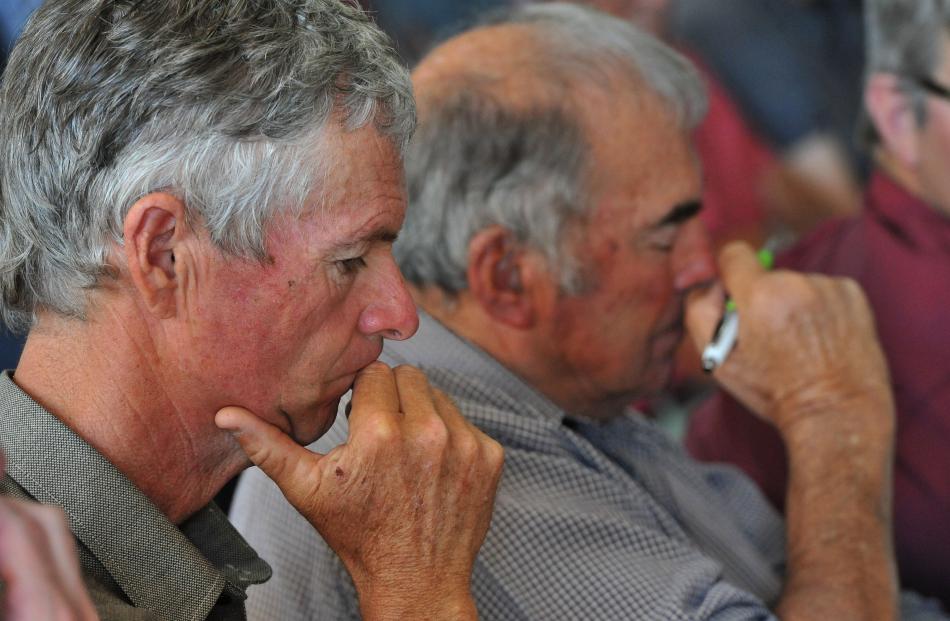 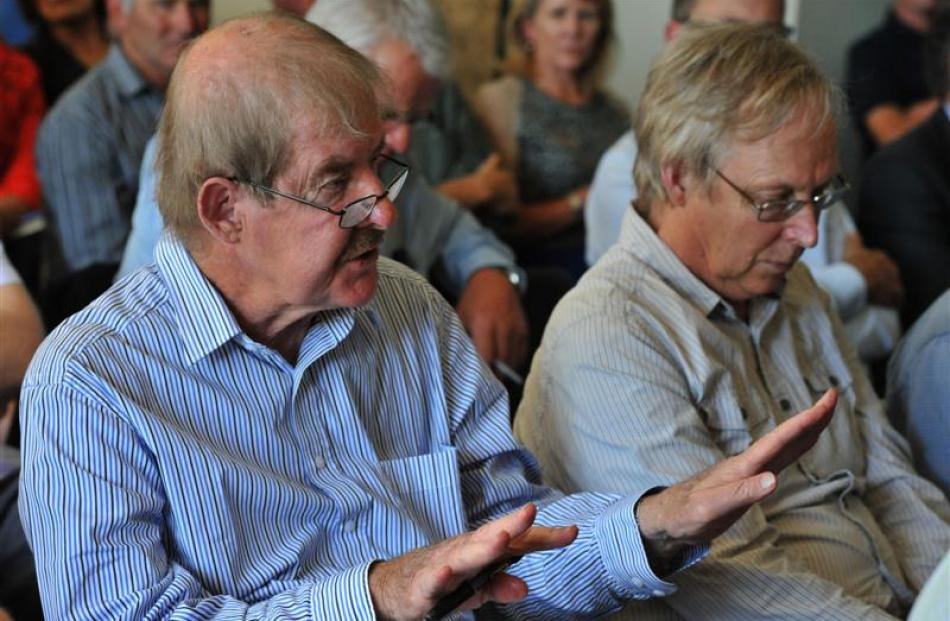 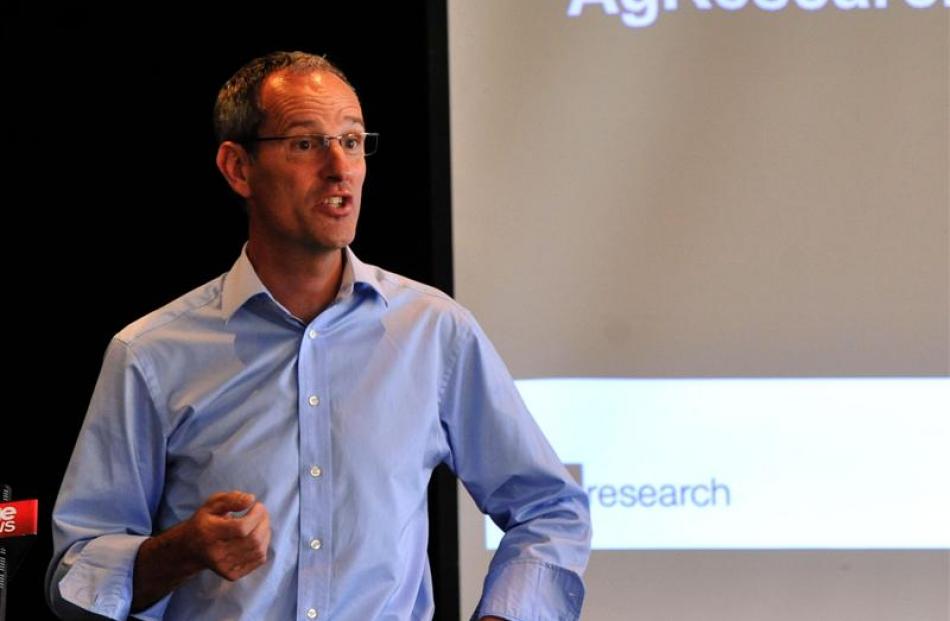 AgResearch's plan to slash the number of scientists at Invermay came under sustained attack at a sheep breeders' meeting in Gore yesterday.

AgResearch board members and senior management attended the meeting, set up by the Southern Texel Breeders Association, hoping to ''bust some of the myths'' about its plan, but left with a clear message of no confidence from farmers and breeders who attended.

By the end of the at-times heated meeting - which lasted more than three hours - motions were approved calling on AgResearch to reverse its plan to shift scientists from Invermay, and for Science and Innovation Minister Steven Joyce to hold an independent inquiry into AgResearch's plan.

It was also revealed that four of Invermay's ''rock star'' scientists did not intend to shift to Lincoln, which one of the meeting's organisers, Hamish Bielski, said would lead to an ''erosion of trust'' among farmers.

AgResearch chairman Sam Robinson, who at times looked uncomfortable, and along with chief executive Dr Tom Richardson came in for some intense questioning, tentatively agreed the board would consider the arguments made, saying ''everything is always up for grabs''.

''No plan is finalised yet, but as we move through time we are going to get to decision time.''

At one stage, he said AgResearch came to ''consult'' farmers, before correcting himself, saying they were there to ''explain our position''.

Meeting organiser Hugh Gardyne finished the meeting by summing up the mood of the about 100 people who attended the meeting.

''The message I want you to take back to the minister is that we are angry. We are angry at the likely outcomes of the Future Footprint proposal.''

He proposed a motion of no confidence in the board and management of AgResearch, which was left on the table after Mr Robinson said such action would ''probably not be helpful''.

Instead, the motion calling for Mr Joyce to hold an inquiry was approved. Mr Bielski earlier said he knew of at least four Invermay ''star'' scientists who were not moving, saying senior scientists John McEwan, Dr Michael Lee, Dr Tricia Johnson and Dr Shannon Clark had indicated they did not plan to shift. There would be an erosion of trust among farmers if these staff did not move.

''There will be huge fallout.''

''If these guys don't shift then we are going to have a real big hole.''

Mr Davis earlier went through a list of 10 reasons to expand Invermay rather than shrink it, saying the proposal to have fewer than 30 science staff at the campus would leave it no longer viable.

''I personally predict that within five years of moving this large number of staff ... that we would see the rest of Invermay being run down to the point of closure.''

Invermay's facilities were also the most up-to-date of any campus.

There was ''ample scope for growth at Invermay'' without the need for new facilities, he said.

Mr Sanderson, whose company had earlier been critical of AgResearch's plan, said the economic benefit it described in a detailed business case was ''pretty much in the margin of error''.

The expected benefit to agriculture of $20 million a year was ''not a large number''.

''Now I'm not really much of a farmer, but $20 million seems like about [the annual profit of] four or five dairy farms.''

There was also ''no sound comparison'' between AgResearch's plan and alternatives.

Earlier at the meeting, Dr Richardson gave the organisation's rationale for its restructuring plan. It was about improving science output, while emphasising that money was tight, he said.

''This has entirely been driven by the desire to do the best possible science in the most efficient way we can,'' Dr Richardson said.

Fewer than half of Invermay's buildings were used, AgResearch's farms were underutilised and many of its facilities were in need of upgrading, he said.

While some of the decisions had been ''tough'', they were all made in the best interest of agricultural science, he said.

He also attempted to ''bust some myths'', saying there was no pressure from the Government to help strengthen Lincoln University or support the Christchurch rebuild.

He also disputed the idea there was a hub around genetics at Invermay, while at the same time talking up the possibility of an environmental and farms systems science hub at the campus - with the possibility of University of Otago staff shifting to the $12 million Christie Building, which was built in 2008.

''I think it is a complete myth to say that we have a hub at Invermay.''

He came in for some fierce criticism over the underutilisation of the new Christie Building, one person saying: ''I wouldn't trust you to build a block of toilets in the Octagon.''

In a statement released after the meeting, Dr Richardson said it had been a good opportunity to share AgResearch's plans.