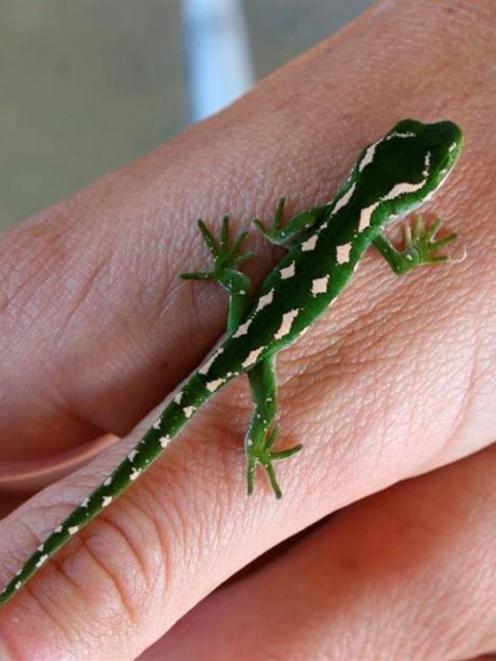 One of the offspring of a gecko that was recovered from wildlife smugglers in Dunedin earlier this year. Photo by Doc.
In the past year alone, up to 200 protected and endangered jewelled geckos, worth about $1.8 million on the black market, could have been taken illegally from spots on Otago Peninsula.

Among those stolen were geckos that had been returned to the peninsula after being recaptured from wildlife smugglers last year.

It has led to a call by Dunedin Judge Stephen Coyle for Parliament to look at stronger penalties for wildlife smuggling. He sentenced Dieter Wilhelm Ernst (56) and Thorsten Gerhard Horst Richartz (47) to four and a-half months' jail each yesterday for hunting and possessing protected wildlife - four jewelled geckos worth more than 5000 ($NZ9000) each, three of which were from Otago Peninsula - in March this year.

As the sentences of four and a-half months on each of the two charges were to be served concurrently and the men had already spent eight and a-half weeks in jail, they would be sent back to Germany next week.

Judge Coyle said the sentence reflected the maximum available penalty of six months' imprisonment, although it did not appear to act as a sufficient deterrent to those interested in visiting New Zealand to "steal our wildlife".

"As the thefts appear to be ongoing and indeed some might say escalating, I urge Parliament to look at revisiting the maximum penalty."

Wildlife smuggling was becoming far too prevalent in New Zealand, in particular on the Otago and Banks peninsulas, and it concerned him "enormously" that the geckos returned to Otago Peninsula last year appeared to have been re-stolen.

"It is offending against every New Zealander."

Ernst's letter of apology, read to the court by counsel Werner van Harselaar, lacked credibility and tried to minimise his offending, he said.

"I do not accept the apology as being genuine or indeed remorseful in any way."

The facts did not bear out Richartz' claim of a lesser involvement, which "ignored the premeditation and repetitive nature" of the offending, Judge Coyle said.

Department of Conservation counsel Pene Williams said the sentences, which included forfeiture of goods used in the offending, were as good as could be expected "given the constraints we are working within".

"The penalties are under review, but unfortunately the review has not been completed in time to deal with these offenders."

Department of Conservation Coastal Otago manager Robin Thomas said it was disappointing the behaviour continued, and the case should signal the department, in conjunction with police, customs, the Wildlife Enforcement Group and the public, had the resources and did react to this crime.

Save the Otago Peninsula Inc spokeswoman Lala Frazer, who was in court for the decision, said it was pleasing the judge had recognised the need for the legislation to be changed.

"A greater penalty is something we want to encourage."

In her report, independent ecologist Dr Marieke Lettink, of Christchurch, said jewelled gecko researcher Carey Knox had found at least 10 jewelled geckos for sale on a website, and it was estimated 100 to 200 animals may have been taken from Otago Peninsula.

The removal would correspond to a decline of about 7% to 14% in the known Otago Peninsula jewelled gecko population, she said.

"The illegal collection of individuals from a wild population is yet another threat that compromises their long-term viability and may doom some populations to extinction."

Illegal collection of wildlife appeared to have been a major factor in the decline and imminent extinction of at least one gecko population on the Otago Peninsula, she said.

At least two other populations on the peninsula were known to have been targeted by poachers, in some cases repeatedly, she said.

It was thought that if the 16 geckos taken by Thomas Price and Gustavo Toledo-Albarran last year had not been returned to the wild, that population would have lost almost half of its breeding females and a quarter of its residents, she said.

"Following the release of the animals in April 2010, the site was again targeted by poachers and an unknown number of animals exported from New Zealand."

Mr Knox said the poaching of geckos had a "pretty severe" effect on what were declining populations.

"They're being taken at a rate they can't replace themselves."

For Mrs Frazer and the volunteers who worked hard to preserve the geckos and their habitat, their removal was devastating, she said in a victim-impact statement presented to the court.

It meant those involved had become suspicious of all visitors, and landowners no longer welcomed strangers on to their land, she said.