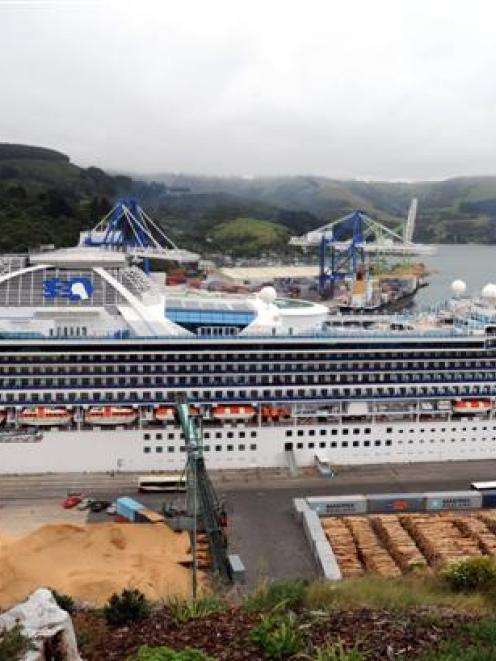 Diamond Princess and Clipper Odyssey berth at Port Chalmers and Dunedin, respectively, on Saturday and Rhapsody of the Seas berths at Port Chalmers yesterday. Photo by Peter McIntosh.
Cruise ship visits injected an estimated $19 million into the Dunedin economy last year, but there was room to improve the tourist experience, according to a cruise industry report prepared by the University of Otago marketing department for Tourism Dunedin.

A lack of fish and chip shops and no Maori welcomes in Dunedin were just some of the comments from cruise ship visitors to Dunedin in the 64-page report funded by a $14,000 grant from the Dunedin City Council.

The report is likely to be sold to other New Zealand ports to offset the research costs, Tourism Dunedin chief executive Hamish Saxton said.

The aim of the report was to provide an overview of what the city was doing well and what it could do better for cruise ship passengers, Mr Saxton said.

"We wanted to share with our local industry a greater insight into cruise ship passengers."

Last season, 64 vessels with more than 100,000 tourists visited the city, making Dunedin the second most popular port visited, he said.

The report noted passengers were satisfied with their experiences in Dunedin.

The Taieri Gorge Railway was singled out as the most popular New Zealand excursion.

"Dunedin was the highlight for many passengers, with the combination of the harbour, the architecture and the scenery being factors that made their visit memorable," the report said.

Visitors expressed concern there was not enough time to shop for souvenirs.

Mr Saxton said it was particularly pleasing many Australian passengers indicated they wanted to return to the city, further underlining the importance of the cruise ship market.

Being either the first or last port of call for cruise ships was an advantage for the city, but while passengers appreciated the piper they expressed an interest to see more Maori culture.

"Passengers were especially disappointed with Dunedin as they had hoped, with it being the final port of call in New Zealand, they would see some kind of indigenous greeting or farewell," the report said.

It also noted passengers preferred to have Maori people, rather than the local mayor, greet them at each port.

The report found other shortcomings included postcards, for sale on the ships, of a Dunedin church that was actually in Adelaide; an Australian on board giving passengers a guide to New Zealand popular phrases; a lack of plain food and a lack of fish and chip shops.