Uncle asked Bain if he 'did it' 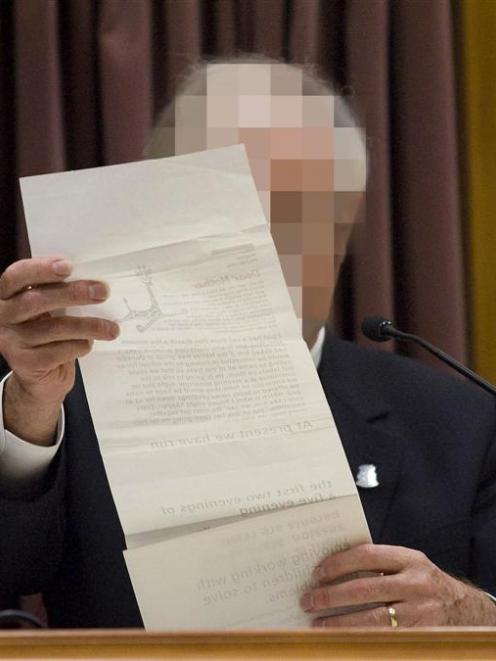 Michael Bain, Robin's brother, reads a letter from Robin, while giving evidence yesterday.
When David Bain's uncle visited him in Dunedin Prison a week after five of the family had been shot, he asked his nephew if he had done it.

Bain replied he had given his side of the story to the police and was "sticking to that".

Michael Bain, one of Robin Bain's brothers said he went to Dunedin Prison on June 28, 1994, with another of David's uncles to talk about what should happen to the family's Every St house.

Because none of the other family members had ventured the subject, he took on himself to ask David did he "do it".

The conversation was four days after Bain's arrest for the murders of his parents, two sisters and younger brother at their Andersons Bay home on June 20, 1994.

Mr Bain, who was giving evidence in the High Court retrial of 37-year-old Bain in Christchurch said he and other family members had decided the house had to come down, as the section was worth more without the dilapidated building than with it.

The controlled burning on July 7 had turned out to be particularly spectacular "a funeral pyre", defence counsel Mr Reed suggested, but Mr Bain said it was not meant to be like that.

The other trustees had looked at bulldozing the house but it was complicated and expensive and would have "excited scavenger interest at the tip", given the killings.

The witness said he was saddened, not by the burning of the house but by the loss of the family.

Completing his evidence yesterday, Michael Bain said he had returned to Dunedin for the depositions hearing in October, 1994 and twice tried to visit his nephew at the Dunedin Prison but Bain was not prepared to see him, although he agreed to two months later.

They discussed Bain's reported "space-outs" and his self-hypnosis and the accused spoke of them as a hiccup, rather than an epileptic fit.

He said there were times when he was "out of it" for 20 minutes at a time.

He could not explain it and could only describe what happened from what other people told him.

Bain said his mother had taught him the art of self-hypnosis and it sounded as if he saw it as a means of "finding the God within", a way of finding peace.

The accused mentioned the tension in the family and said it was worse when Robin was home, that his father was "a domineering person".

He said Laniet left home because she could not stand the domination, that Margaret and Arawa had resisted it and he also wanted to resist but did not want to leave home.

Mr Bain described Robin as a humble man who was very proud of all his children and their achievements.

He was particularly pleased that Arawa was following him into teaching and was very proud of her being a finalist in the "Queen of the Heather" competition in Dunedin.

Robin had not said much to him about Laniet, who the witness described as someone who needed affection "from a very young age", a very pretty girl, who liked to be loved.

But his brother had been proud of the fact David was a singer and was in the Royal Dunedin Male Voice Choir with him.

He was also proud of David for graduating from Outward Bound in 1992 and of Stephen becoming a musician.

Mr Bain said he bought the family computer from the Bain estate and used it until he upgraded to a new machine, at which time he put the old one in the basement of his house.

When he went to show it to a friend two years ago it would not "crank up".

Letters Robin had written to their mother in Otaki were "consistent with Robin as I knew him", the witness said.

They talked about the family and his pride in them, about his work at Taieri Beach School and the internet programme he had introduced for his pupils and his excitement with experimenting with the new school computer.

Mr Bain said his brother had a good sense of humour and was a very caring man, anxious to avoid putting stress on their mother with any problems he might be having.

He wrote positive letters and did not really share his difficulties with the rest of the family.

Robin was "a stoic person" who tried to deal with his problems himself.

He agreed with Mr Reed that, in retrospect, Robin had been "putting on a brave face" for his mother in the letters after the happy family Christmas holiday at the end of 1993.

And the last time he had seen him, at Wellington Airport with a heavy bag of preserves from his mother, when Robin had commented about having to go back and "face it all", the witness agreed he felt his brother was "saddened" after such a happy time.

Robin had not told him he and Margaret were separated and the witness said they were still "a family unit" as far as he was aware.

Asked whether he was aware Robin had been described as dressing shabbily and lacking personal hygiene, Mr Bain said he believed Robin's dress standards had become relaxed after 15 years in Papua New Guinea, and he was "disappointed" to hear comments about Robin's personal hygiene.

To a suggestion his nephew refused to see him because he had begun to distrust him, believing he was reporting their conversations to the police, Mr Bain agreed he had not wanted his brother accused of murder.

But he said he was distressed any of the family might be accused.

He recalled his nephew telling him he found it difficult to express grief, especially in prison, that he was concerned if he started feeling it he would descend into depression and he did not want to do that.

The accused also said he objected to being pictured as unfeeling and lacking in emotion.

The Crown, represented by Kieran Raftery, Cameron Mander and Robin Bates contend Bain murdered the family, using his early morning paper round as an alibi and made it look like Robin shot them before committing suicide.

But the defence, represented by Michael Reed QC, Helen Cull QC, Paul Morten and Matthew Karam argue Robin was the killer and turned the gun on himself because he was about to be exposed for an incestuous relationship with his younger daughter Laniet.

The trial, before Justice Panckhurst and a jury of seven men and five women began on March 2 and the Crown case is likely to be completed within the next two weeks.