Union steps up the fight for Hillside 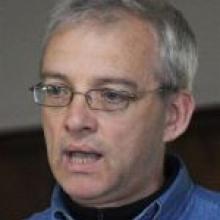 John Kerr
A groundswell of support has convinced Rail and Maritime Transport Union South Island organiser John Kerr the battle to save the Hillside Engineering workshops will be won.

"From our perspective, there is a groundswell of support, which is very reassuring," Mr Kerr said. "It's not often you get a coalition of local business, politicians and the community. All we've got to do now is convince the Government."

The groups discussed the launch of a campaign to convince KiwiRail to overturn its decision to cut 40 jobs at the government-owned plant, and commit to building rolling stock there.

"The public campaign will be cranked up over the coming weeks and we are going to work hard at fleshing out the economic and financial arguments for saving Hillside."

The "professional approach" will start with a petition, pamphlet drops to South Dunedin residents, protest postcards for individuals to sign and send to the Government, and a public meeting and rally on Wednesday.

"I'm confident we will win this campaign," Mr Kerr said.

Labour MP Pete Hodgson said its aim was to tell the Government it asked the wrong question.

The "multiplier effect" was not taken into account during the "detrimental" Hillside decision, as money paid to Chinese firms would have no flow-on benefits to the New Zealand economy.

DCC business development adviser Des Adamson said the council would help show KiwiRail Hillside was a "marvellous asset" which has "support around it from other companies".

"We would like KiwiRail to see Hillside as a gem in its crown."

The council would work to "allay any fears" KiwiRail may have about what Hillside was capable of, and support the introduction of new capabilities to ensure Hillside had a future.

• A public meeting will be held on Wednesday, June 22, at 7pm, at Cargill Enterprises Hall, 199 Hillside Rd, Dunedin, for people to show their support for the Keep Kiwis Working Campaign.