University dream must wait for now 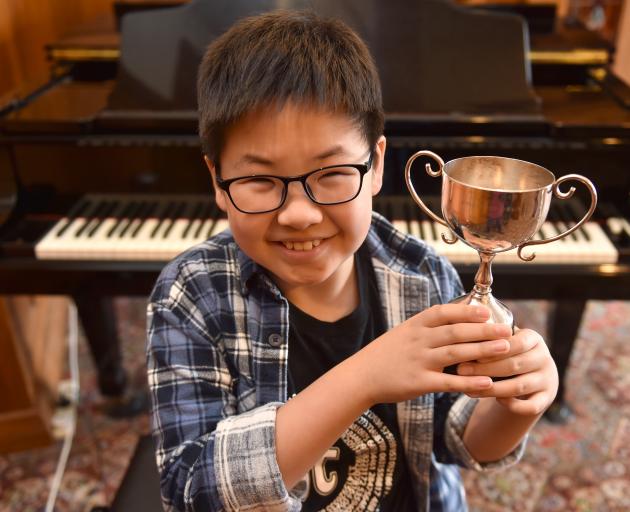 The multi-talented Nathanael Koh holds a recent composing award. Photo: Gregor Richardson
A 9-year-old Dunedin wonderkid has all the credentials to enter university, but his dream of tertiary education may have to wait a few years.

Next year, he plans to take O level chemistry and physics, his SAT exams, and A level ‘‘pure’’ mathematics, which is equivalent to NCEA level 3.

The high-achieving youngster has plans to go to university as soon as possible to study music and medicine.

While he has the academic prerequisites, all the universities the family has contacted said he was too young.

Nathanael said he felt ‘‘quite disappointed’’.

‘‘But I do not feel as disappointed as when I fail my exams.’’

The Cambridge exams were difficult, but ‘‘quite fun’’.

‘‘Difficult is always fun,’’ he said.

Nathanael wanted to be a ‘‘credible composer’’ so others could enjoy his music.

His mother, Wendy Koh, said her son’s ambition was driving all the success.

‘‘Going to university is something he wants to do, but if the universities don’t let him in, there’s not much we can do.’’

Nathanael is home-schooled at the family’s house in Glenleith, but for the more difficult subjects, the family brings in outside tutors.

‘‘We just let him do whatever he wants at his own pace.’’

Among his many achievements, Nathanael earlier this year received an ATCL musical theory diploma from Trinity College in London, which is a first-year tertiary qualification.

He is a member of ‘‘genius’’ society Mensa and last month was appointed as the youngest composer-in-residence for the Kids Philharmonic in Singapore.

The 90-member orchestra will play his music both at the Victoria Concert Hall in two weeks and at the grand Yong Siew Toh Conservatory of Music in March.