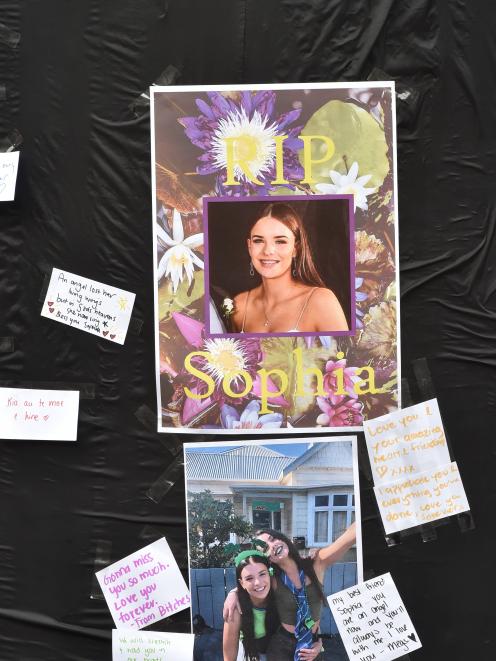 A tribute wall for Sophia Crestani is created in the University of Otago's union courtyard. Photo: Gregor Richardson
The University of Otago has established a centre offering support for those affected by a party that turned deadly in Dundas St at the weekend, as a police investigation continues.

In a statement yesterday, the university said it was ''deeply saddened by the tragic events that occurred at the weekend''.

''Anyone affected by the weekend's events are encouraged to attend for support. Our deepest sympathies are with all those affected, and we will continue to support and work with our students and staff at this very difficult and sad time.''

The centre was open 9am to 5pm yesterday and will reopen today for the same hours.

Police area prevention manager Wil Black said officers would be available on campus for anyone who had information about the incident.

A police caravan is stationed for this purpose outside the university union food court during the day and into early evening this week.

Inquiries on behalf of the coroner continued yesterday, and police were ''supporting the family and friends of Miss Crestani at this difficult time''.

''Police are also still working closely with the University of Otago, to ensure there is support for anyone who needs it across the wider student body.''

A police spokeswoman said 30 detectives were working on the case alongside victim support, the community policing team and others.

Police investigating the tragedy would be considering whether the organisers could be liable for criminal nuisance, legal experts told The New Zealand Herald.

But they said any potential charges would be difficult to pursue because of the chaotic nature of the event.

University of Auckland law professor Bill Hodge said it was an unprecedented case and the police investigation was likely to consider more unusual parts of criminal law.

Criminal nuisance, which is punishable by up to a year in jail, was one of the areas they would be looking at, he said.

''It's a catch-all. It's a box into which you put things that don't fit very well any place else.''

Prof Hodge said police would also be looking at provisions in the Crimes Act which related to ''duty of persons doing dangerous acts'', ''in charge of dangerous things'', or ''avoiding omissions dangerous to life''.

''If one of those things is breached and it leads to a death, then you might have an argument, at least, of manslaughter. Again, the police would be considering that.''

AUT law professor Warren Brookbanks said a criminal nuisance charge required police to prove that a person had knowledge that what they were doing would endanger public safety or lives.

''There is a knowledge element. That will be the thing that is difficult to prove in a context like this, because the whole thing happened very suddenly, when the students panicked.

''Questions of what people knew or what could have been anticipated would be very much in the balance if the matter came to court.''

He said manslaughter charges were highly unlikely because it would be difficult to prove individual liability.

Miss Crestani's parents, Bede and Elspeth, yesterday issued a statement through the university, saying they were ''grieving the loss of our beautiful daughter and so is the community which Sophia knew and cared for''.

The Dundas St house is covered in flowers and a memorial has been created outside the union.