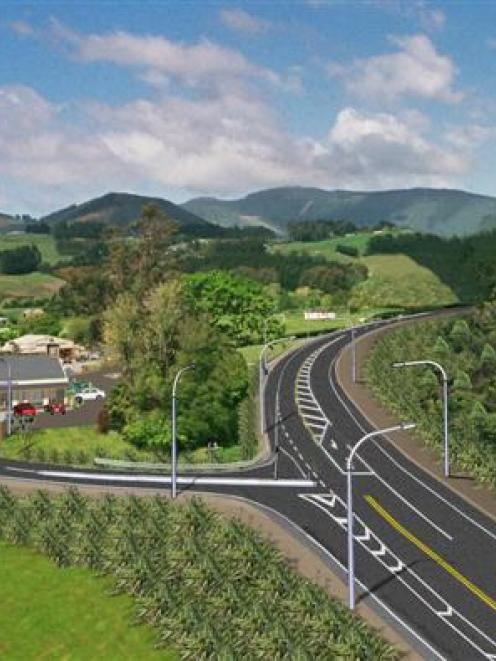 New Zealand Transport Agency project manager Simon Underwood said the image was indicative only, as there could be further refinement after public consultation.
A long-awaited realignment of State Highway 1 at Waitati is set to start early next year, and measures including car pooling and bus bays appear to have allayed the concerns of the local community.

As well, the New Zealand Transport Agency (NZTA) has addressed another problem that has dogged the project: agreeing to shift the Blueskin General Store to a temporary site on Harvey St while the work is under way, then to the Waitati side of the highway after that, as part of the project's costs.

NZTA project manager Simon Underwood announced yesterday publicly notified resource consents for the $3.5 million to $4 million project would be lodged in July and the work was expected to start early next year.

The NZTA targeted the curve at the entrance to the settlement for improvement in 2005, because of the number of crashes in the area.

But apart from the future of the store, the project faced community concerns about room for bus stops, community pick-up and drop-off areas and room to pick up hitchhikers.

The community has developed a car-pooling scheme in the past, for which members used designated pick-up points at set times.

Waikouaiti Coast Community Board chairman Alasdair Morrison said earlier this year he was concerned the issues had not been addressed.

But following meetings between the board and the NZTA, Mr Morrison said yesterday he was "pretty much" happy with the plans.

Mr Underwood said construction was expected to begin in January next year, and be completed by December 2012.

That was longer than usual, because of the time it would take to shift the store twice, but did not mean there would be two years of disruption to traffic.

He said it was recognised from the outset the general store would need to be maintained for the project to be a success.

The store would move to a site next to Blueskin Nurseries, but that could not happen until the road work was finished, so a temporary home would be built on Harvey St.

It was planned to reuse as much of that building as possible in the store's permanent home.

The new store would be accessible from Harvey St, and would have improved parking and turning areas for vehicles.

Adding the car pooling and bus bays was not expected to cost any more, as land from the existing carriageway would be used.

Store owner Brent Bell said he had had regular contact with the agency, and if the move was going to happen "there's no use fighting it".