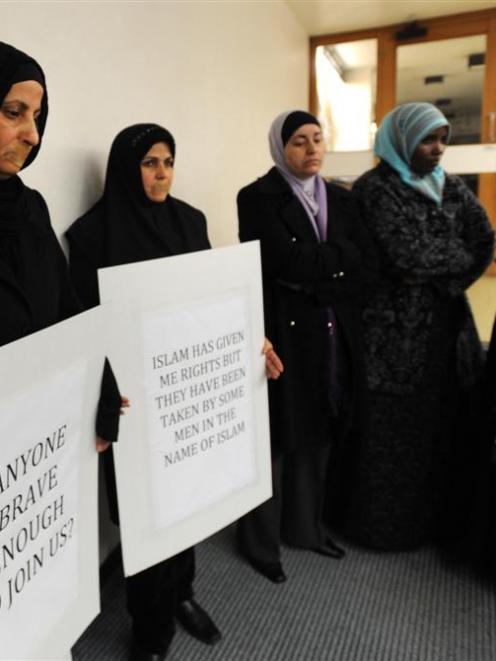 Protesters and onlookers outside a meeting organised for Islam Awareness Week at the University of Otago's Burns Theatre last night. Photo by Peter McIntosh.
A small group of Dunedin Muslim women protested for free speech after two others were advised they could not speak at the front of a public meeting attended by men last night.

Flanked at times by a dozen supporters, two women stood vigil outside an otherwise positive meeting on the experience of converts to Islam, hosted by the University of Otago Muslim Association as part of the Islam Awareness Week.

Their mouths were taped shut but a placard they held outside the Burns Theatre said "Islam has given me rights but they have been taken by some men in the name of Islam".

Earlier, protester Zarghona Lafraie, a nurse at Dunedin Hospital, said it was absolutely ridiculous to find "such intolerance" among some in a New Zealand Muslim community.

"I came from Afghanistan and if I wanted this, I could have stayed and lived under the Taliban," she said.

She stood outside the meeting for more than an hour until a settlement was reached and the women whose situation she protested went inside.

The pair did not formally address the meeting.

Instead, they sat with the nearly 40 women there and took questions from some in the more than 60-strong audience.

Steve Johnston, who is also chairman of the Otago Muslim Association, said the protest followed the advice from imam Sheik Asrarul-Haque that it would be inappropriate for women to address a mixed group.

The advice came during the weekend, and a separate forum for women was organised for next weekend.

The whole situation may not have been communicated very well, he said.

"But, as sisters have participated in small forums in the past, some feel aggrieved about the advice.

"This is something we will definitely have to discuss as a community. Right now, it is still too early, too raw."