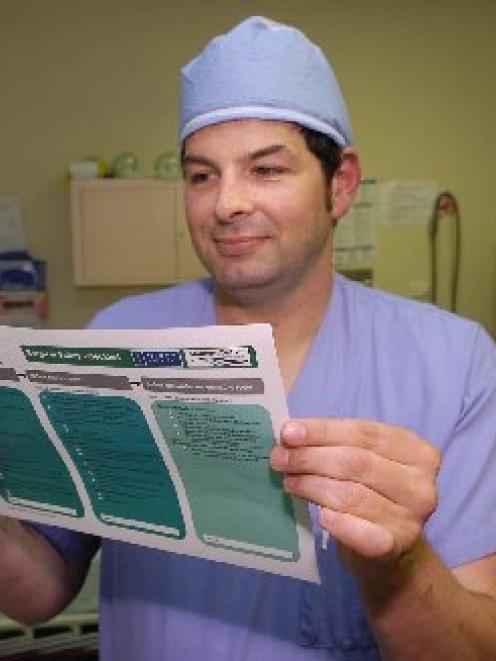 Dunedin Hospital's anaesthesia clinical leader, Dr Paul Templer, displays the surgical safety checklist used for all patients undergoing surgery. He is in a procedure room in the hospital where the first checks are done by the nurse, anaesthetist and technician while the patient is still awake. Photo by Jane Dawber.
The wrong patient got the right treatment in one of the serious adverse events reported by the Otago District Health Board last year, but the situation should not happen again.

The patient, undergoing a day surgery procedure which did not require an anaesthetic, was not correctly identified before the surgery went ahead.

However, because the patient was one of a group of patients receiving the same procedure that day, the surgery was correct.

It is this type of situation which the introduction of World Health Organisation surgical safety checklist is designed to eliminate, Southern District Health Board (Otago) clinical leader for anaesthesia, Dr Paul Templer, says.

The aim of the simple list was to sort out problems before they arose.

While the hospital already had a variety of checks, the WHO list had been tested in a variety of settings throughout the world and shown to save lives.

Increasingly, it had been seen as the standard for hospitals to use.

The checklist has three sections.

The first is completed before the patient is anaesthetised.

It includes such things as checking identity, patient allergies and the amount of blood likely to be required in the operation.

If surgeons anticipated that blood loss would exceed that usually expected for a particular type of operation, it meant the team could plan for that, rather than have the situation where someone bled "five litres and you are expecting 300ml - very exciting".

The second section involving all sections of the theatre team takes place before the first incision.

First on that list is the requirement for all team members to introduce themselves by name and role.

While this might sound obvious, Dr Templer points out there can be about nine people in the room and over the course of the day the make-up of that group could change.

It was important to know exactly who people were so that they could be involved appropriately.

The patient's name, procedure and where the incision will be made is also among the aspects of the case which are rechecked at this time.

The third section of the list involves checks before the patient leaves the operating room including a verbal stating of the name of the procedure and the patient's name, the completion of equipment counts, and whether there are any equipment problems which need to be addressed.

Dr Templer, who was one of those on the committee involved with the list's introduction in May, said there was less resistance to it than might have been expected.

People had been concerned that it might be too time consuming, but that had not proved to be the case.