Students wait to cast their vote. PHOTOS: GERARD O'BRIEN
A queue formed yesterday when advanced voting booths opened at the University of Otago for those wanting to cast an early vote in the general election.

Miss Harrison, a first-time voter, said young people were an ``untapped resource'' as they did not vote in large enough numbers.

Where you can vote early by electorate

Mr Trevella said the election was more relevant to young people because issues such as education and the environment were at the forefront.

``A lot of these issues are going to affect the younger generation the most,'' Mr Trevella said. 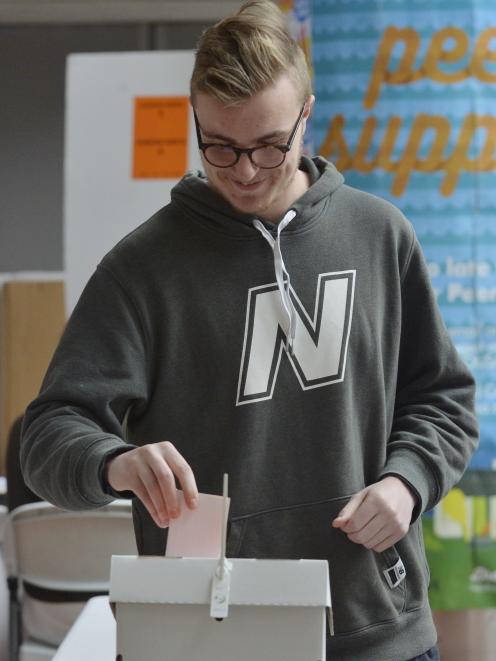 Logan Copland (22) had a different perspective.

He did not want to divulge his voting choice, but said it was probably easy to guess, as he was from a rural area, Clinton.

He said he was concerned about Labour's signalled tax increases.

Nationally, there is a total of 485 advance voting places, an increase from 295 locations in 2014.

The packs were sent to voters who had enrolled before August 23 - but it is not too late to enrol.

Chief electoral officer Alicia Wright said there had been a big increase in advance votes over the past two elections.

``Advance voting places are located where people live, work, study and shop, including universities and shopping malls, and many of them are open after-hours and at weekends,'' Ms Wright said.

The election is on September 23.