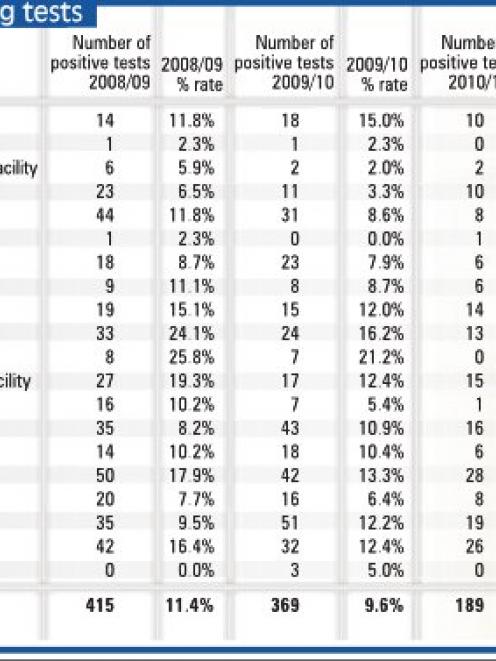 Random prison drug tests. ODT graphic.
Drugs are being shut out of the country's prisons, with prisoners recording fewer positive drug tests as the Department of Corrections clamps down on contraband.

Figures released to the Otago Daily Times under the Official Information Act show the number of positive tests for prisoners has declined to an "all-time low of 6%", Prison Services acting general manger Brendan Anstiss said.

"While we would like to see all prisoners return negative results, this is something that no prison jurisdiction in the world has ever achieved."

Two-thirds of prisoners entered prison with a drug or alcohol problem, and many had a "lifelong history of drug dependency".

"A significant amount of crime is committed by offenders who are affected by drug or alcohol on the day of their offending."

The majority of prison sites had recorded a decline in positive drug tests, and they had "significantly declined" over the past few years.

Of this year's positive tests, 164 were for cannabis, 12 were for amphetamine-type stimulants, four were for benzodiazepines, two were for methadone and six were for opiates.

Remand prisoners returned a higher positive rate than those already sentenced because they were in transition from the community to custody.

The make-up of each prison's population, security features and site geography resulted in "unique characteristics" for each prison. he said.

To help educate prisoners about addiction, nine drug treatment unit (DTU) programmes - of which six were six-month programmes - were based in the country's prisons.

The department aimed to increase the number of DTU places available in prisons from 500 to 1000 by the end of this year, he said.

"Reducing both the supply and demand for drugs in prison is a major focus for the department, by giving prisoners the opportunity to beat their addictions through DTUs and keeping drugs out of prison," Mr Anstiss said.

"Given the demand for drugs in prison, prisoners and their associates are thinking of ever more inventive ways to smuggle drugs into prison. Examples include filling tennis balls with drugs and throwing them over the fence, hiding drugs in shoes, books and other items of personal property and smuggling drugs internally."

Methamphetamine represented a particular problem, as the drug was easy to conceal and only a very small amount was needed to achieve a high.

Corrections Minister Judith Collins said the changes had made it harder to get drugs into prisons.

"Prisoners who reoffend often have drug and alcohol problems, so if we are to reduce crime we must do what we can to help prisoners beat these addictions. If we want to get serious about this we must keep drugs out of our prisons," Ms Collins said.

Testing
• Prisoners selected randomly by computer programme.
• Nearly 4000 general drug tests carried out each year; equates to more than half the total prison population.Of remand prisoners, only those who have been in prison for at least 30 days are tested, with testing to measure compliance with the rules within prison, not measure behaviour in the community.
• The 4000 Corrections staff are not tested.

$30m of meth found in handbags