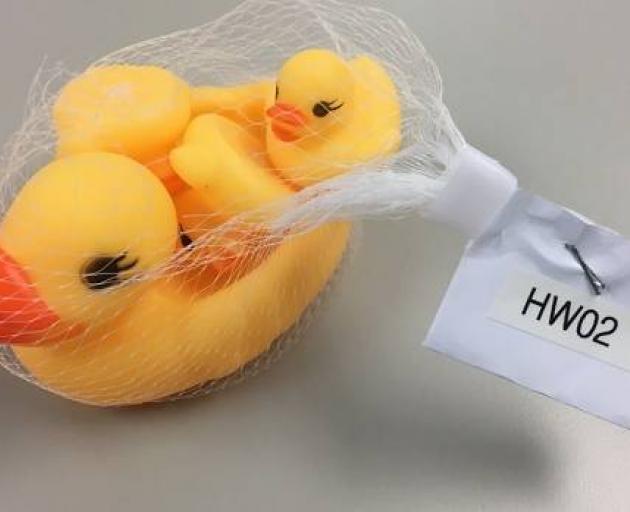 Rubber ducks that posed a choking risk to young children helped earn an importer a $20,000 fine. Photo: Commerce Commission
A toy importer has been fined $20,000 on toy-safety related charges that included rubber ducks and squeezy animals.

The Commerce Commission said Haiwing International Ltd had pleaded guilty to two representative charges that from January 2015 to July 2017 it sold 59 units of an unsafe rubber duck set and 80 units of an unsafe set of squeezy animal toys.

Three other companies would soon be sentenced on toy-safety related charges, the commission said.

The fine against Haiwing meant that from January 2017, courts had imposed fines of nearly $900,000, in 14 successful commission prosecutions over unsafe toys.

The commission bought products from Haiwing's Trade Me site and sent them for testing. Squeakers in the ducks and squeezy animals became separated and were determined to be a choking hazard to children aged 36 months and younger.

Furthermore, three of the ducks and nine of the squeezy animals were small enough to fit through a testing template, meaning they posed a risk of lodging in a small child's throat and causing the child to choke.

The commission said that In sentencing at the Auckland District Court on April 11, Judge David Sharp stated suppliers of toys needed to "be aware of their duties and cautious about compliance".

Sharp noted that "the absence of compliance mechanisms within the defendant company is an aggravating feature."

Including discounts for its guilty pleas, co-operation and lack of previous convictions, Sharp initially arrived at a penalty of $40,500 but reduced it to $20,000 in recognition of Haiwing's financial position.

The commission's toy safety cases often arise from its programme of unannounced visits to retailers of toys for young children.

"These prosecutions are about the safety of children, and it is essential that those involved in supplying and retailing toys for young children understand and comply with their legal obligations," said Antonia Horrocks, the commission's general manager, competition and consumer.

"We visit retailers or their online sites, test potentially non-compliant toys and – if need be – prosecute those involved in supplying them. We also try to educate toy suppliers with a wide range of information resources in various languages. If you supply toys for young children we urge you to check our materials, find out about your legal obligations, and pay careful attention to the safety of the toys you supply."

The commission said Accident Compensation Corporation figures show that between 2014 and 2018 there were at least 32 accident claims relating to choking on toys by children 36 months and younger.

The mandatory standard for toys covers toys intended for use by children up to 36 months of age. It aims to reduce the risk of injury or death to young children by ensuring that toys intended for their use are not so small, or do not have parts so small, that they could be swallowed or ingested causing choking.

Testing of such products includes tension, torque (twist), and drop testing, and it is designed to simulate normal use and reasonably foreseeable abuse of toys by young children.

The choking hazard from small toy parts is the subject of episode 9 of the Commission's animated series It's All Good.

The commission has released three videos, designed to help businesses, which, respectively, show the potentially devastating impact of supplying an unsafe toy, provide guidance on the mandatory product safety standards on toys for young children, and demonstrate toy testing.

Cases before the courts:

First Mart has pleaded guilty to one charge that, between December 2015 and January 2018, it imported over 800 units of a slide car toy which resembled the "Peppa Pig" brand of products (but which, the commission understands, were not licensed "Peppa Pig" products), and supplied 540 units to various retailers.

The commission alleges that various small parts became separated during testing, including the pig figure, and/or its ears, wheels, and axles and these parts represented a choking hazard to young children.

First Mart will be sentenced in the Manukau District Court on April 29.

This company has pleaded guilty to selling more than 1600 units of an Aquatic toy set, a baby rattle set and a 5.5 inch (15 cm) soft plastic doll, all of which, the commission alleges, failed to pass commission tests. Small parts were separated from the toys during testing, and those parts represented a choking hazard to young children.

2 Boys imports toys and sells them via eight retail outlets branded as "Lotsa Goodies" which are owned by companies linked to the 2 Boys owners. The shops are in Auckland, Hamilton and Christchurch.

2 Boys will be sentenced in the Manukau court on June 20.

ACQ has pleaded guilty to supplying to retailers around 1800 units of a set of four rubber ducks between May 2017 and March 2018.

The commission alleges that during testing, the squeaker device came loose from all ducks tested and those squeakers represented a choking hazard because of their small size.

The rubber duck set comprised one large duck and three small ducks. In addition to the choking hazard from squeakers, the commission alleges that the small ducks in the set were small enough to fit through a testing template, meaning they pose a risk of lodging in a small child's throat and are a choking hazard.

ACQ will be sentenced in the Auckland District Court on July 19.