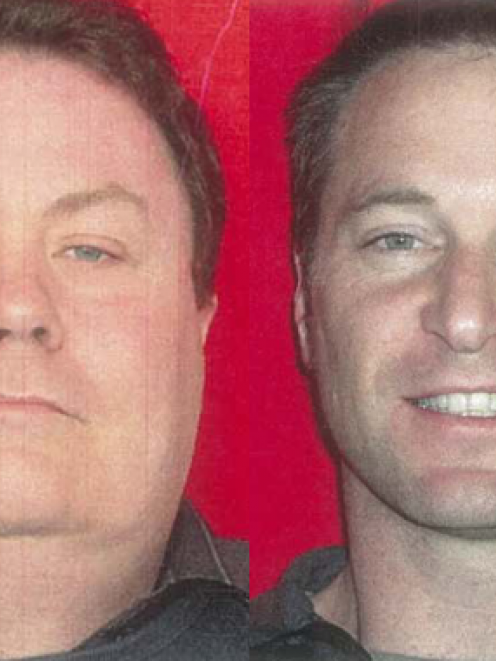 Two of the men missing from the Air NZ Airbus are Michael Gyles, left, and Noel Marsh, both of Christchurch.
Officials have confirmed that the missing Civil Aviation Authority inspector on board the Air New Zealand Airbus A320 that plunged into the Mediterranean Sea was Jeremy Cook.

The 150-seat A320 was being assessed by an Air New Zealand team of three engineers and one of the airline's most experienced A320 captains before it was returned to Air New Zealand.

Earlier, tears flowed today as hundreds of Air New Zealand staff were told of the death of four colleagues in an air crash off the coast of southern France.

The Air New Zealand Airbus A320 plunged into the Mediterranean Sea about 5am (NZ time) as it made its final approach to Perpignan Airport after an assessment flight.

Nothing was known of any distress calls or communications with air traffic controllers before the nearly new aircraft crashed.

"The search and rescue authorities are not optimistic given the conditions, of finding any survivors," said Air New Zealand chief executive Rob Fyfe.

Today, hundreds of Air New Zealand staff gathered at the airline's headquarters in Auckland where many were in tears as they were told the aircraft had crashed and there was little, if any, chance of any survivors, Mr Fyfe said.

One of the families of one of the New Zealand crew would travel to France with Mr Fyfe tonight.

The aircraft, freshly painted in Air New Zealand livery, could be seen from the surface, sitting on the seabed with its tail clearly visible.

At first light, specialist divers were expected to search inside the aircraft for signs of the missing men and clues about the cause of the crash.

Five French Navy ships and two helicopters had searched for survivors. However, as darkness fell and the wind speed increased to about 30 knots, the helicopters returned to their base, leaving the ships to search throughout the night.

The French search and rescue authorities were doing all they could but had "grave concerns" about the missing men, Mr Fyfe said.

The aircraft was due to be returned to Air New Zealand after a two-year lease to the German airline XL Airlines.

Capt Horrell was sitting in the jump seat behind the German pilots, Mr Fyfe said.

The aircraft had been in the air for about two hours and had undergone a series of manoeuvres as part of the assessment of its condition and performance before it was returned to Air New Zealand in the next few days.

It had turned and begun its final approach to Perpignan Airport when it crashed into the sea.

"The witness reports seem to suggest the aircraft was relatively low in the sky on a normal airfield approach configuration at the time the incident occurred."

Nothing in the aircraft's maintenance history while it was at XL Airways had raised concerns, he said.