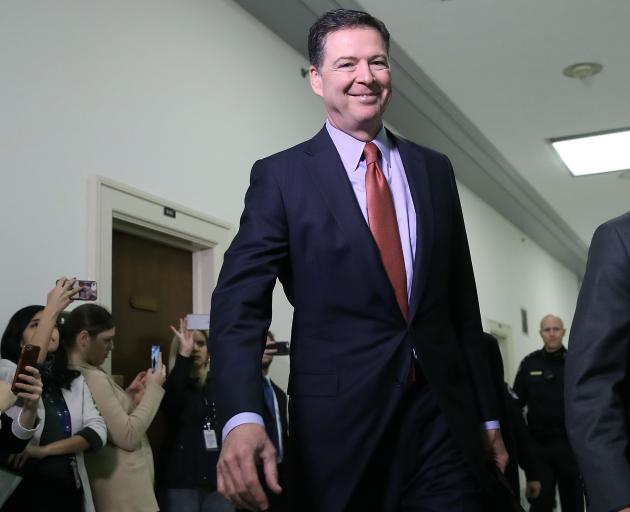 Comey and Trump have been at public loggerheads since the President controversially fired the FBI director in 2017, igniting a political firestorm.

While speaking at political conference Politicon in Nashville on Saturday (Sunday NZ time) Comey said he was "optimistic" even if there were no impeachment of Trump, American people would "pass judgment on what kind of country we want to be".

The United States was diverse in its approach to political policy, but there was a core set of values that "hold this place together".

"We don't have the normal human glue that holds this country together, we don't have common ancestry, common language, common faith we have nothing in common except this set of values.

"Our leaders must reflect the glue that holds us together, they can't be people who lie all the time, they just can't."

MSNBC host Nicolle Wallace then asked Comey if he would still believe that if Trump were re-elected in 2020.

"I will be, from my new home in New Zealand, I still will believe in America."

Comey visited New Zealand while still FBI director in April 2017 for a meeting of spying network Five Eyes - the global alliance of the US, the UK, Canada, Australia and New Zealand.

Comey was also in New Zealand in March 2016, when he met with Minister for the Government Communications and Security Bureau and Security Intelligence Service Chris Finlayson and Police Commissioner Mike Bush.

Trump fired Comey as FBI Director in May 2017 amid a sprawling investigation into Russian meddling in the 2016 election and any potential Trump campaign role in it.

Trump disapproved of the way Comey handled the investigation, and investigations into Hillary Clinton's emails.

Trump went on to publicly criticise Comey through social media and the press, calling him a "liar and a leaker".

The criticism reached an apex last year when Comey released a damaging tell-all book called A Higher Loyalty, a scathing depiction of his interactions with Trump, in which he likens the President to an "unethical" Mob boss and casts his inner circle in largely unflattering terms, saying it was more focused on politics than national security.

Actor Jeff Daniels has signed on to star as the former FBI director in a new four-episode miniseries based on the book, produced by CBS.

After he has served his time in prison, he might not be eligible to come here.
I say might because as we have seen, Lees-Galloway has a soft spot for bad boys.

He may well want to relocate to New Zealand, but I hope this means that he will be subject to the usual immigration procedures. On the face of it, it looks like typical USA arrogance. I have nothing against Comey - in fact I admire his stance - but not if it leads to a massive influx of anti and pro Trump renegades.

That would be NZ's loss.