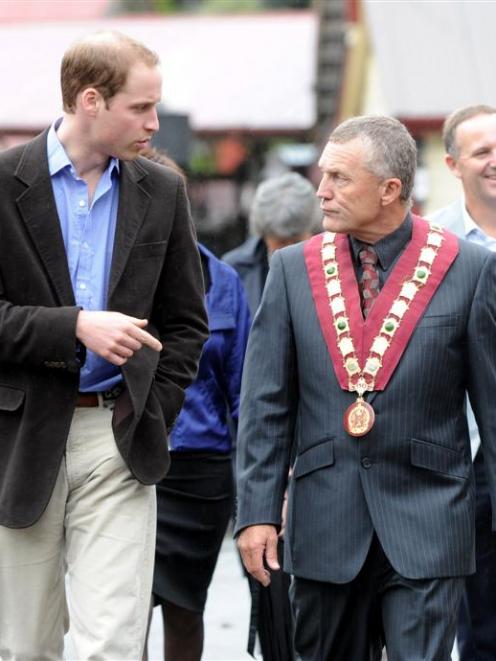 Price William, left with the Grey District Mayor Tony Kokshoorn on his arrival at Shanty Town to meet with families of the 29 men killed in the Pike River Coal mine disaster. Credit:NZPA / Ross Setford POOL
Prince William had a first hand taste of New Zealand's two most recent deadly tragedies, visiting earthquake-ravaged Christchurch and meeting families of the Pike River Coal mine victims.

The 28-year-old heir to the throne, who will attend a memorial service for earthquake victims today, described the devastation in Christchurch as    "unbelievable'' during yesterday's tour of the city centre, where 182 people lost their lives in February 22's 6.3-magnitude quake.

"It's just the scale of it, it is unbelievable,'' the Prince said outside Latimer Square. "It really does bring it home to see it leaning like that. When you see buildings like that...that's very, very sad.''

He met fire fighters and dozens of urban search and rescue workers and commended them on their fantastic job in searching the wreckage for bodies.

He said it had been an "horrendous time for disasters in the last six months''.

Prince William, who is a helicopter pilot in the Royal Air Force, said there were a lot in the military who "were gnashing our teeth to get over here'' and help.

Marshall told the Prince he grabbed his camera before immediately going to work on the day of the quake.

"Sure you did. You journalists are all the same. You'll all film first,'' the Prince joked.

He also spoke to Fairfax reporter Keith Lynch about damage to the historic home of The Press newspaper in Cathedral Square, and passed on his condolences to the family of killed employee Adrienne Isobel Lindsay.

The Prince then flew to Greymouth to visit families of the 29 men killed in the Pike River coal mine explosion on November 19.

More than 150 relatives of the victims turned out in pouring rain to meet the Prince, where he had the chance to speak privately with them.

Grey District Mayor Tony Kokshoorn said it was humbling that the Prince travelled thousands of kilometres to help these families grieve.

"It is a really compassionate gesture,'' he said.

"He's a guy who is about to get married to a very beautiful young woman... and instead of having a stag party he's come down here to Christchurch.''

For Christchurch's Margery Stone, the Prince's visit was the first time she had seen a royal since his grandmother Queen Elizabeth toured in 1953.

"When the Queen visited in 1953, I presented her with a bouquet,'' Ms Stone said.

He is due to leave Wellington on Saturday for Australia, where he will tour some of recently heavily flood-damaged areas.