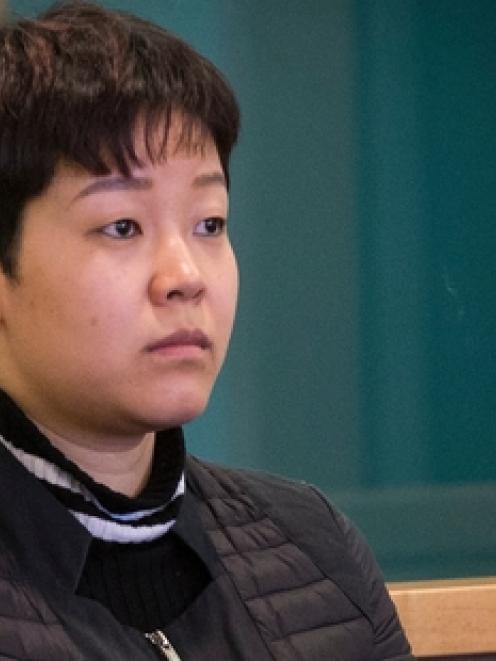 Yixin Gan now awaits the date for a new trial. Photo: NZ Herald
The High Court trial of a woman accused of the "almost perfect" crime was aborted after a juror spoke to a key Crown witness.

And two of the most serious charges of large-scale drug importations were dismissed by the judge because of a lack of evidence.

One of the import charges was linked to 250kg of ContacNT, a cold and flu medicine which contains the Class-B drug pseudoephedrine, being seized by police in October 2013.

The drugs were disguised as potato starch in shipments from China to Tonga, via Auckland.

Two other importation charges were later laid against Gan after police searched freight records for similar shipments from China, then matched those dates to her bank records.

The jury was told there was a spike of cash deposits into Gan's accounts, totalling $7 million, which a police financial analyst said appeared to correlate to shipment dates.

But after an application by defence lawyer Graeme Newell, Justice Wylie dismissed those two charges.

Gan still faced charges of importation and possession for supply linked to the October 2013 shipment.

Normally the trial would carry on, said Justice Wylie, but a member of a jury made a "favourable comment" to a key Crown witness in front of other jurors outside of the courtroom.

"She has disqualified herself and the rest of the jury. As a result, I'm left in no position but to discharge you as a jury."

Aborting the trial was a "matter of concern", said Justice Wylie, as a considerable cost to the Crown, the justice system and emotional distress for Gan, a 35-year-old mother of three.

"I had no alternative. I hope the juror is listening. My directions to you at the beginning of the trial was to not speak to anyone. Unfortunately those directions have been breached."

A date for a new trial has yet to be scheduled.

In his opening address to the jury, Crown prosecutor Scott McColgan said Gan had "cottoned on to an almost perfect" method of smuggling the drugs into the country.

She ran a legitimate business shipping food from China to the Pacific Islands, with a short stop in New Zealand. But because the shipments were shown as goods in transit - and therefore not technically coming through the border - the consignments were not inspected by Customs.

Instead, the shipments were sent to the secure Customs-controlled area at Auckland Airport until being sent to the final destination.

"But what if you had an inside man in the Customs-controlled area?" was the question Mr McColgan posed to the jury.

The "inside man" for Gan, according to the Crown, was Mosese Uele, who ran a freight-forwarding company called Ezi World Cargo.

In one such shipment, at least 250kg of ContacNT was disguised as potato starch.

Inside the Ezi World Cargo premises, Uele switched the ContacNT with legitimate potato starch to be sent to Tonga. The boxes of drugs were put in a van and driven to a carpark in Auckland - all while being followed by police.

"It was almost the perfect scam," said Mr McColgan, "but for Gan's involvement with two people, who, unfortunately for her, were under surveillance by police. Otherwise it is very unlikely this scam would have ever come to light."

The "inside man" for Gan, Mosese Uele, was also convicted of importation of a Class-B drug, while Yoke Lee was convicted of possession for supply.