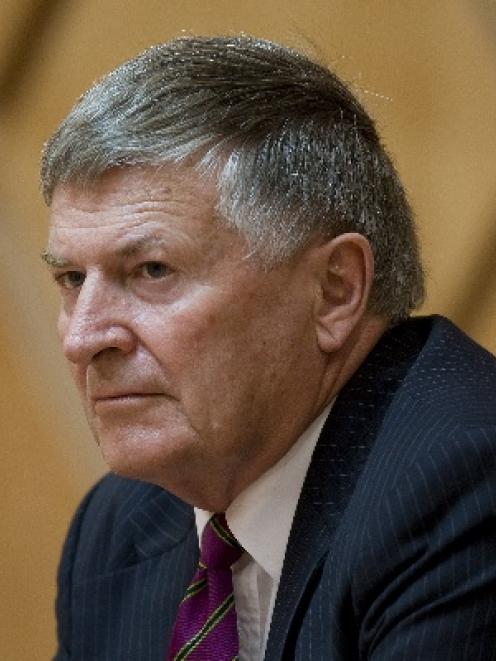 Bill Wilson. Photo by NZPA.
Justice Bill Wilson resigned from the Supreme Court bench today, taking with him a $410,000 year's salary after a scandal over non-disclosure of a business relationship that shocked the legal community.

Acting Attorney-General Judith Collins announced his resignation this afternoon. It was not his first offer to step down.

"He offered his resignation some weeks ago on terms which were unacceptable to me..he has now offered to resign on terms that are acceptable to me, that I have judged are in the best interests of the country and of the judiciary and of the taxpayer,'' she told Radio NZ.

She would not reveal why she turned down the original offer, but under the terms of a settlement Justice Wilson will now get a year's salary of $410,000, which is taxable.

The Crown will pay Justice Wilson's solicitor-client costs which to date have been calculated at $475,000. He will also get existing entitlements, including untaken sabbatical leave and retiring leave. That amount has yet to be calculated.

Ms Collins said she accepted his resignation, effective from November 5, because the legal process involved in Justice Wilson's case could have taken another 12 to 18 months, with "massive costs'' to the taxpayer.

"We have for some months a Supreme Court judge effectively on garden leave getting paid for not having to do the job that he was asked to do when he was appointed and that would have continued on, as I say for 12 to 18 months.''

His resignation is effective from November 5.

Justice Wilson, 65, has been on the Supreme Court bench for three years.

But the incident, which ultimately ended his career, occurred when he was on the Court of Appeal bench in 2007 hearing a wool levies case in which Alan Galbraith, QC, appeared for one of the parties that was successful in its appeal.

Allegations were made that Justice Wilson did not disclose his business relationship with Mr Galbraith.

The Supreme Court last November ordered the decision be set aside and the case re-heard, on the grounds Justice Wilson and Mr Galbraith's relationship could raise a perception of bias.

In May this year, Ms Collins accepted the recommendation of Judicial Conduct Commissioner Sir David Gascoigne that there should be further inquiries into complaints against Justice Wilson.

A judicial conduct panel was set up for the first time in New Zealand to hear the complaints.

But the High Court last month quashed the decision to establish it following a judicial review sought by Justice Wilson. The matter was sent back to Sir David to make a more complete recommendation.

Ms Collins said today Justice Wilson had not been accused of a crime.

The resignation resolved "an unprecedented situation in New Zealand's legal history,'' she said.

"To proceed with this case would have caused incalculable damage to confidence in the judiciary.''

There was no comment from Justice Wilson or the Supreme Court.