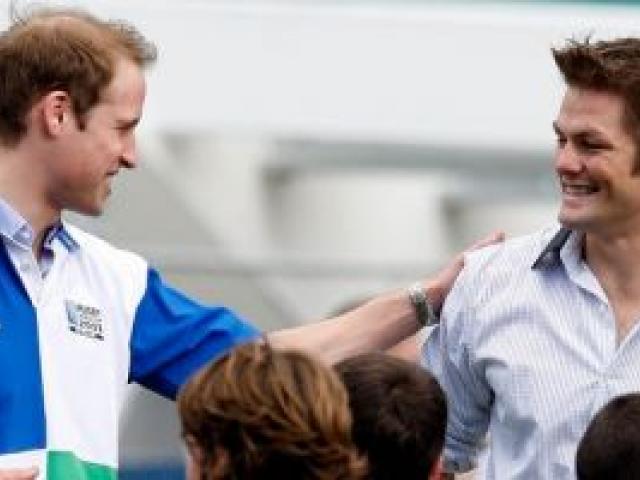 Prince William has met Richie McCaw several times. Photo: NZ Herald/Sarah Ivey
All Black captain Richie McCaw is looking forward to catching up with his mate the Prince this weekend.

McCaw, who has spent time with William on several occasions and was invited to the Prince's wedding, told the Herald he would see the future King again at the Regal Rugby Fun Day event in Dunedin on Sunday.

"He's a pretty decent bloke and I've met him a few times now," said McCaw. "The All Blacks caught up with him in 2005 when the Lions toured and he's come into our changing sheds a couple of times on our northern tours, especially when we have played Wales."

William and his wife, Catherine, will meet the young Rippa Rugby teams and cheer them on for the event's final, before awarding prizes.

"It'll be good to see them both at our royal rugby event in Dunedin and I'm looking forward to it.

"I know he loves his rugby and it's great that rugby is able to play its part in making the tour pretty special for them," McCaw said.

The Prince will also present the IRB Junior World Championship cup to former NZ junior player Aaron Smith to recognise the Under-20 worlds being held in Auckland next year.

- Morgan Tait of the NZ Herald