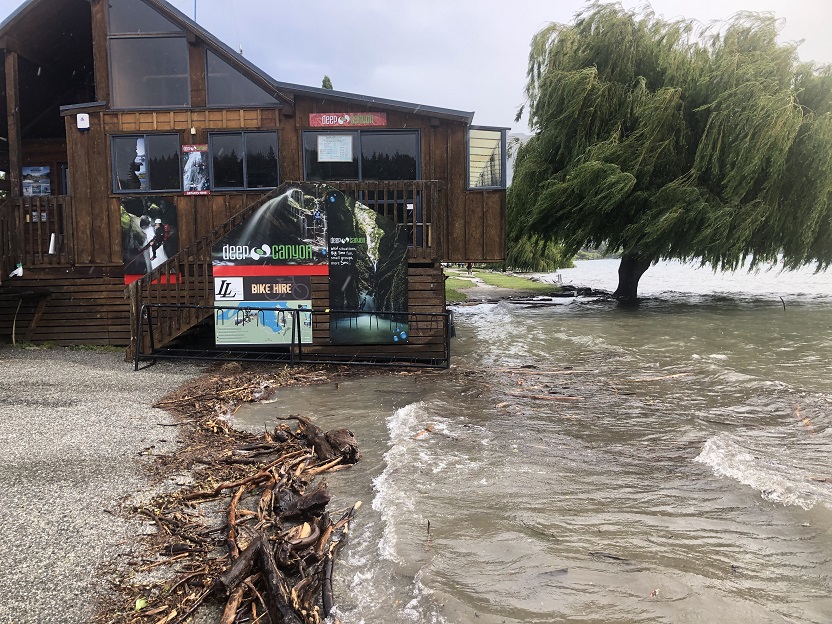 The water level in Lake Wanaka had residents on alert today. Photo: Kerrie Waterworth
Wild weather has lashed the country the past few days, and more rain is on the way for some places in coming days.

Rain has hammered the West Coast, with over 400mm of rainfall recorded on the mountains in the area, and 324mm recorded closer to sea level at Milford Sound.

MetService forecaster Gerrard Bellam said the rain was expected to remain all week in the area.

“They’re in for a prolonged period of rain in the West Coast,” he said.

Bellam said a “very deep low” in the southwest Tasman sea was slowly moving, around which weather systems were rotating and maintaining a big northwesterly flow up the country.

Successive (heavy) rain events this week will impact the west of the South Island.

Using our test ensemble modelling, we examine the potential for more than 100 mm of daily rain through to Saturday.

While this will increase flood threat, it'll also increase risk for slips. pic.twitter.com/MRdvTPEdWb

The area most affected by this will be the West Coast, where plenty of thunderstorms and heavy rainfall are expected on Wednesday and Thursday.

“That will cause rivers to rise and that will then feed through to the Canterbury and Otago lakes as well.”

Rain lashed Arthurs Pass and Mt Cook as well today, with 200mm recorded on Mt Cook as the rain travelled over the ranges

Wanaka residents have been put on alert as water levels continue to rise, while the Queenstown Lakes District Council said it was considering providing sand and sandbags in town on Wednesday morning.

The northerly winds are expected to remain on Wednesday, easing off in the afternoon, with a high of 25C.

In Wellington, screeching winds gusted up to 117km/h around midday at Wellington Airport, but Bellam said it settled down in the afternoon.

Air New Zealand flights were cancelled out of the airport until mid-afternoon and the airline said it would be running additional services later on Tuesday evening to accommodate disrupted customers.

The wind ripped down trees in Makara, Strathmore, Island Bay, Thorndon, and Hataitai, downed a street light in Aotea Quay, and reportedly cracked a window pane in the Majestic Centre tower in Willis St.

Mt Kaukau was one of the windiest spots in the area, with gales hitting 144km/h at 1pm on Tuesday afternoon, with an average speed just above Wellington’s recorded wind speed.

But Wellingtonians will see a more typical wind pattern on Wednesday, Bellam said, with strong gusty northerly winds expected in the city.

A high of 18C is expected, with a chance of cloud or showers in the morning and again on Wednesday evening.

Auckland’s Harbour Bridge was hammered by strong winds on Tuesday afternoon as the front moved through the city.

Gusts of up to 74km/h were seen at Auckland Airport, as the temperature dropped to 17C and up to 4mm recorded, Bellam said.

Yet commuters had a sunny drive home as the skies cleared on Tuesday evening and the temperature rose back up to 20C.

Wednesday will dawn fine in the City of Sails, apart from morning cloud or fog, with a high of 24C.

Light winds and sea breezes are expected in the city, with a chance of an afternoon shower.

Thursday is a similar story, clearing to a fine afternoon.

Hawkes Bay hit the national high on Tuesday, soaring up to 30C in Hastings.

Down south, Dunedin will be hit with a warm northerly flow on Wednesday, with a high of 23C and perhaps a few spots of rain that will clear in the afternoon.

Invercargill is set to be a bit cooler, with occasional rain developing in the morning, westerly winds and a high of 17C.