Prince stunned by scale of destruction 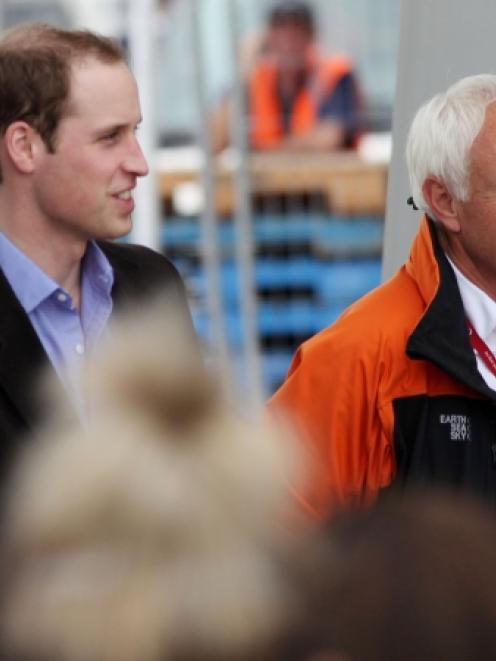 Just before 1pm, the Prince entered the red zone, travelling up Gloucester St and stopping first at Cathedral Square.

Urban Search and Rescue (USAR) engineer Des Bull and Reverend Peter Beck were among those to meet Prince William at the ruined site of the Christ Church Cathedral.

The Prince then travelled down badly damaged Colombo and Manchester Streets before arriving at Latimer Square.

Outside the square, which has been acting as the base for USAR teams, Mr Bull told Prince William about the damage to the Hotel Grand Chancellor, which remains on a lean in the central business district.

"It's just the scale of it, it is unbelievable," the Prince said outside Latimer Square.

"It really does bring it home to see it leaning like that. When you see buildings like that...that's very, very sad."

Inside Latimer Square, he was greeted by dozens of USAR workers.

"You guys have been doing a sterling job. You really have. You have done fantastically well," the Prince said.

He said it had been an "horrendous time for disasters in the last six months".

"There was a lot of us who were in the military were gnashing our teeth to get over here," he said.

USAR area commander Steve Barclay was among those who spoke to the prince.

"It's a great morale boaster to have him here. It's not purely symbolic. We had Russell Crowe here the other day and we had John Key and having the Prince come all this way to acknowledge our problems is a real morale boaster, and we really appreciate it."

When USAR teams got Prince William to pose for a picture, they put a cap on his head and he joked, "it smells a bit dodge".

Prince William also spoke to Shane O'Brien, another USAR officer whose house in Bexley was badly hit by the quake.

"Who are these two lovely girls and are you looking after dad?" Prince William asked the pair, telling Mr O'Brien Lilah and Verity were proud of their father.

"It gives us all a boast. While New Zealand is a tiny little place in the middle of nowhere, it's nice to know the world knows where we are and who we are," Mr O'Brien said.

Marshall told the Prince he grabbed his camera before immediately going to work on the day of the quake.

"Sure you did. You journalists are all the same. You'll all film first," the Prince joked.

The Prince also told Marshall the damage has "really been brought home to me".

He spoke to Fairfax reporter Keith Lynch about damage to the historic home of The Press newspaper in Cathedral Square, and passed on his condolences to the family of killed employee Adrienne Isobel Lindsay.

At his final stop, the Christchurch Fire Station, Prince William was introduced to firefighters.

He spoke at length to Paul Rodwell and Terry Gyde, who pulled Japanese quake victim Norika Masutani from the ruins of the CTV building.

"He was interested in how the building looked and the conditions when we got there," Mr Rodwell said.

He told the Prince how they tried to free the young woman, who asked doctors not to cut her leg off.

During his time at the station, a fire alarm went off forcing one crew to speed off to an emergency.

But the Prince continued talking to other firefighters.

"He seems like me to a wonderfully genuine nice guy who was seriously amazed by what he was seen.

"It's great that he could be here and be part of this today and it acknowledges the significant of what's happened here."