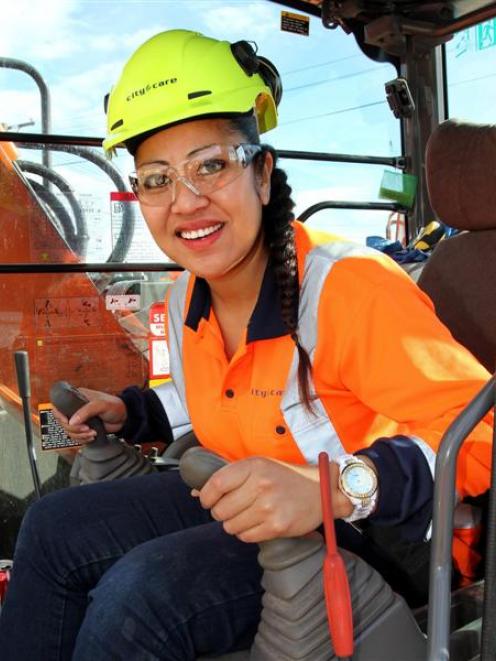 Farrah Sipa's love of heavy machinery goes back to childhood.
Barbie dolls were not in Farrah Sipa's toy box when she was younger; instead it was cars and marbles, and she used to play on an old, run-down bulldozer left in a nearby park.

From there, she developed a knack for heavy machinery and loves nothing more than operating a loader or digger.

The 28-year-old mother of one's passion for the civil industry grew after she worked in drainage for five years, operating heavy machinery, before she became a health and safety officer at City Care.

But she would like to see more women get involved in the industry.

"There should be more women working in the industry. I'm always looking out for more. Having the presence of a woman changes the working environment. The guys say they are very tidy, smooth when they are operating machinery, very clean, but they can be tough.

"It's different working with a group of men compared to women. I've only worked with men until I came to City Care and I've never had a problem. They are a great bunch of guys and they do look after us.

"They have a sense of if it looks too hard for a woman to do then they will do it.

"But I never let them do any of the heavy, fun stuff I wanted to do. If I know I can do it, I tell them. They are impressed with what we can do. They are funny, talk a lot of rubbish sometimes, but they are very supportive," she said.

One of the issues women faced when entering any male-dominated industry was being underestimated by employers.

"If they ever think of entering into any industry they should. It would be great to see more woman out there. Just give it a go," she said.

"I feel I'm playing a great role in helping with the rebuild. There's so much work to be done, but it is getting there. Working alongside guys out in the field to ensure they comply with regulations is very enjoyable. I've operated a lot of machinery, from diggers to bulldozers, and I loved it, which is one of the main reasons why I entered the civil industry," she said.