A New Zealand woman has shared her grief on social media after her longtime boyfriend died after falling 100m down Bolivia's "Death Road".

Grimly known as "Death Road", Yungas Rd links La Paz, the capital, to Coroico and claims the lives of around 300 people each year.

Emile Vollenhoven and Brittany Homan had been holidaying in South America before the incident unfolded. 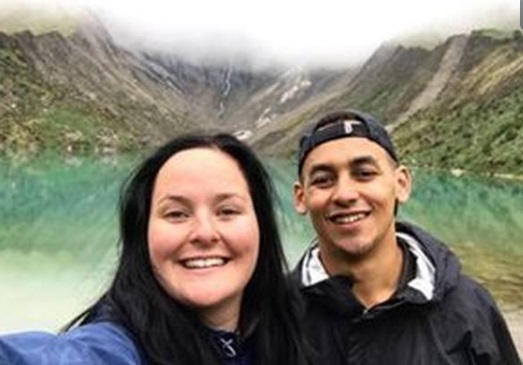 Emile Vollenhoven and Brittany Homan were holidaying in South America. Photo: Facebook via NZ Herald
Vollenhoven died after falling down a cliff around 11.50am local time on January 22 (6.50pm January 23 NZT), in rainy conditions during a mountain bike tour.

"My baby. My soulmate. My everything. 5 years were not enough but I will cherish every moment we had," Homan wrote on Instagram.

"Fly high my angel, wait for me up there, I'll always be yours."

"The Gravity guides went back up the road to look for him and identified where he had fallen off the road," he said.

"The lead guide abseiled down to where he had fallen to [approximately 100m below the road] and determined that he showed no signs of life."

The Ministry of Foreign Affairs and Trade confirmed it was aware of the death of a New Zealander in Bolivia and was providing consular support.

No more information could be confirmed due to privacy considerations.

The 64km road winds through mountainous terrain with a vertical descent 3,600m and was created by Paraguayan prisoners in the 1930s.

The first 20km of the road are paved asphalt but turn into a single-lane dirt road which features significant cliff-side drops.

Matthew said the company was conducting its own investigation and co-operating with local and international authorities to uncover as many details as possible about the accident.

Gravity Assisted Mountain Biking was established by Matthew in 1998.

"Gravity has safely guided more than 100,000 clients down the road during this time, while Gravity has previously had one customer die of a heart attack, this is the first rider we have had die in a bicycle accident."

It was the first bicycle death for the company, the only other fatality occurred when a man died of a heart attack.

On Facebook, Homan said Vollenhoven was the "love of my life, my guardian angel."

"I will always love you and always be yours. Rest In Peace my baby."

Bolivia is in central South America and the country covers sections of the Andes Mountains and Amazon Basin rainforest.