'We will remember them'- NZ turns out in record numbers 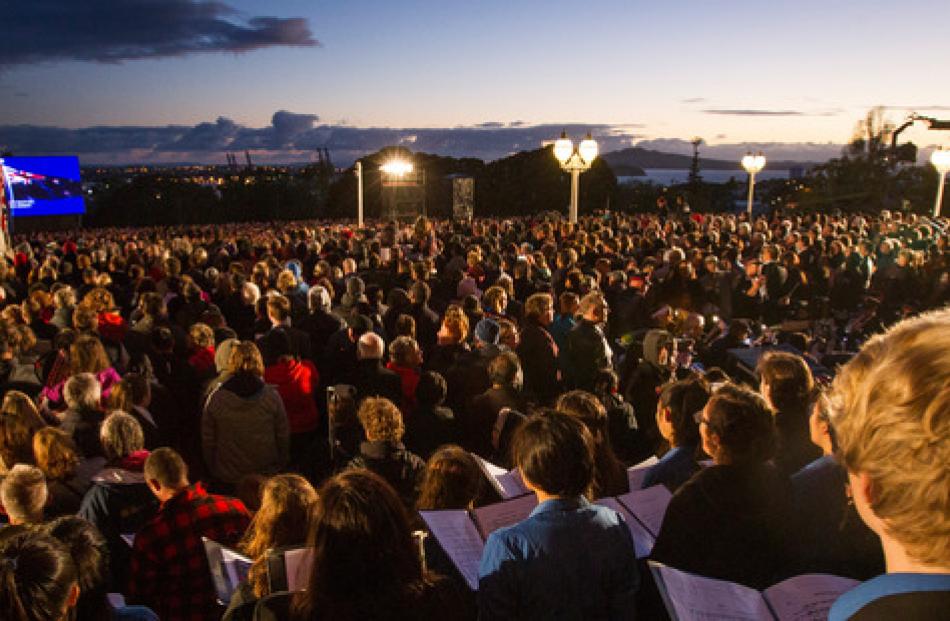 New Zealanders gathered around the country to see the first light of the day and remember the people who died in battle while forging the Anzac spirit.

Dawn services around the country saw record numbers of attendees as the significance of the centenary anniversary gave people an added reason to leave their warm beds at an early hour to attend services.

The largest crowd in the country attended the 76th annual Dawn Service at the Auckland War Memorial Museum.

As the first light of Anzac Day illuminated the cenotaph at the memorial, and the New Zealand, Australian and the Union Jack flags were lowered to half-mast, the crowd of thousands of Aucklanders was silent.

Among the sea of people paying their respects were youngsters experiencing the early morning rise and sombre service for the first time.

The service began with a rousing performance by the Auckland Pipe Band, with bagpipes bringing tears to the eyes of many in the crowd.

Veterans and current members of the Defence and other national services were piped on to the Court of Honour at the Auckland War memorial, around which thousands of people stood in respectful silence, honouring their service and remembering those no longer with us.

The morning was cold in Auckland, with temperatures in the early-teens and a light breeze that rippled the flags on the cenotaph.

Auckland Mayor Len Brown addressed the crowd and reminded people that New Zealand's population was just one million when 100,000 people went to war, meaning one in 10 people left their homes, jobs and communities to fight.

"When we consider the names on the memorials or the crosses on the field, let us not remember just them, but the families that lost them and the fledgling close-knit communities they came from."

The crowd of tens of thousands echoed the words "we will remember them".

Meanwhile, in Wellington the silence over the crowd of thousands gathered to commemorate the 100th anniversary of the Gallipoli landings at Wellington's Pukeahu National War Memorial Park was broken as the sound of soldiers marching in hobnail boots echoed across Anzac Square and the memorial park.

As sunrise pierced the dark on the still morning, a lone piper piped the Flowers of the Forrest lament from a platform halfway up the Carillon.

Sir Jerry told the crowd that 100 years ago, New Zealand and Australian troops shared an experience that changed both nations forever.

"If we cast our minds back to this day 100 years ago, all the months of training for our soldiers would be put to the test in battle.

Later in the morning several hundred people arrived at the Cenotaph near Parliament grounds for the Wellington City Council's citizen's wreath laying ceremony.

In Christchurch, 102-year-old veteran Bill Mitchell led the Dawn Service procession, flanked by soldiers on horseback, while other veterans marched behind.

One veteran, who lost an uncle at Gallipoli, explained his pride at be able to lay a wreath this morning: "He's on one of those crosses up there. He was a very brave man and it's great to be here today for the 100."

Gunshots rang out as the crowd of thousands stood in silence and the sun rose over Christchurch's Cramner Square.

There were unprecedented crowds across Otago this morning, with an estimated 18,000 to 20,000 people attending the Dawn Service at Queens Garden in Dunedin.

The area surrounding the garden and cenotaph was full to capacity, as were nearby streets, as a much larger than usual crowd gathered to mark the centenary.

In Queenstown, up to 3000 people gathered for the Dawn Service, as barely a breath of wind blew off Lake Wakatipu.

There were similar numbers in Oamaru and Greymouth this morning.

Numbers in the Bay of Plenty were also strong, with one of the largest crowds in recent memory in Rotorua.

They stood shoulder to shoulder as the city's pipe band led the parade of veterans and service personnel on to the Muruika War Cemetery grounds at Ohinemutu.

Playing The Last Post and Reveille -- on a bugle played at Gallipoli 100 years ago by former Rotorua soldier Fred Johnson -- was bugler Ken Johnson, who did admirably on an old instrument battered and worn by war.

In Tauranga, a large crowd in the thousands -- estimated to at least double previous years -- gathered at the Tauranga RSA's cenotaph in Greerton.

A sea of heads with a smattering of children on shoulders could be seen behind the seats reserved for veterans and guests too frail to stand for the duration of the service.

At Mount Maunganui, members of the public laid wreaths and poppies on the cenotaph. Two Harvard bomber planes flew over the cenotaph as the crowd uttered: "We will remember them."