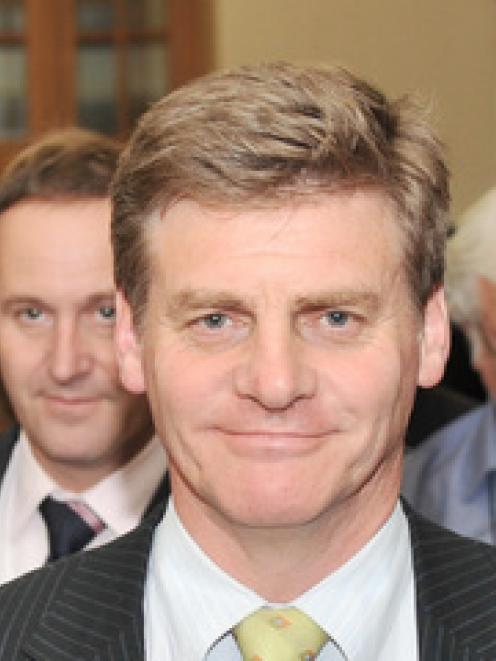 Deputy National leader Bill English
Finance Minister Bill English has confirmed there is likely to be a "significant" rise in the amount workers pay to ACC from April 1 next year.

He said the Government would try to constrain the recommended rise which would take $5.40 a week extra out of the average earner's tax packet next year, rising to $7.23 by 2011.

He said on Radio New Zealand there were likely to be "significant increases in the earners levy" from April 1 and accused the former Labour government of "manipulating ACC for political purposes".

The Government has accused Labour ministers of blindsiding it by failing to include the forecast ACC funding shortfalls in the pre-election economic and fiscal update (Prefu).

Two days ago former ACC minister Maryan Street released a timeline that said she was first warned about problem in August and was not able to give formal advice to Treasury until late October -- after the cut off date for the Prefu.

But the New Zealand Herald reported today Treasury officials had been aware of the problem in August -- two months before the Prefu -- and had referred in documents to plans to immediately brief then finance minister Michael Cullen on the issue.

Prime Minister John Key has ordered a ministerial inquiry into why the liabilities were not disclosed.

Dr Smith this week revealed a $1.25 billion four-year shortfall in the corporation's "non-earners account" and yesterday he said there was an even larger $1.33b three-year hole forecast in the earners account.

The earners account is funded through a 1.4c in the dollar levy on salaries and wages.

Dr Smith said Labour Department officials had advised him to lift that levy to 2c next year, rising to 2.2c over the next three years.

Dr Smith said he was concerned about the scale of the proposed increases, but something had to be done.

The alternative to raising levies would be the Government taking on the liability, probably through increased debt.

Dr Smith said a decision on next year's rate would have to be taken by Christmas.

He warned there could also be "significant cost increases" in the motor vehicle account, which is paid for through vehicle registrations.

More claims, increased medical costs, a relaxing of criteria, a dive in return from investments held by ACC and a move to full funding through levies by 2014 have all been cited as factors behind the funding shortfalls.

But Labour leader Phil Goff accused the Government of beating up the problem in a bid to create a sense of crisis and soften the public up for privatisation.