Succession must be carefully planned ahead of time 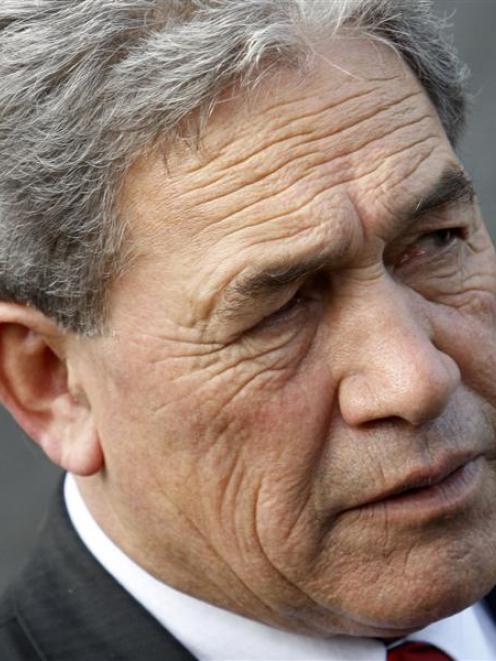 Winston Peters.
To vary an old joke about very old men marrying very young women, the next leader of New Zealand First may not have even been born yet, let alone reached the voting age.

Unfortunately for Winston Peters - who has been in Parliament on and off for near on four decades and been at the helm of the party he founded for all of its 22-year history - such wisecracks are not designed to dampen speculation about leadership succession.

Their purpose is to intensify it.

Mr Peters' 70th birthday back in April and Ron Mark's subsequent ousting of Tracey Martin from the post of deputy leader in a rather strangely polite and seemingly bloodless coup have pushed the question of succession in the party's top job to the forefront every time the spotlight falls on New Zealand First - in the minds of the media at least.

Technically, there is nothing stopping Mr Peters from trying to emulate the politician after whom he is named.

Winston Churchill began his second stint as Britain's prime minister when he was in his late 70s.

He did not leave Parliament until the year before his death at the age of 90.

Mr Peters might prefer whisky and cigarettes to Mr Churchill's port and cigars but the former appears to be in rude good health and is as passionate and energised as ever.

But the business of politics is now such that longevity of the Churchillian kind is no longer prized.

Even so, as night follows day, Mr Peters will stand for Parliament at the next general election in two years.

That is not a prediction; it is a 100% safe assumption with a money-back guarantee.

If nothing else, he has a point to prove. He will want to show that his by-election victory in the Northland seat was no fluke or was the result of voters having the luxury of voting against the Government without having to worry they might end up ousting it.

Of some significance, Mr Peters is talking more openly about being part of a government following the 2017 election - rather than having New Zealand First sitting on Parliament's crossbenches and thus outside government - as he indicated he might do during last year's election campaign.

However, it is a stretch to see him standing in 2020. When he goes, he will leave some very big shoes for his successor to fill.

The party needs a succession plan which manages Mr Peters' eventual exit and sees a smooth transition to the new leadership.

If there was an abrupt change at the top, the winner of the subsequent leadership ballot might well find themselves in the invidious position of being constantly compared with Mr Peters.

It would be the kiss of death.

One option might be some kind of dual arrangement which would see the new leader in an understudy role while Mr Peters performed a mentoring role while slowly relinquishing the position.

A precedent is Singapore, where Lee Kuan Yew served as prime minister for decades.

He groomed his successor but, on stepping down, remained within the Government as a chief minister with a wide advisory role.

Some might find some irony in Mr Peters following the example of an Asian country with vast holdings in New Zealand.

However, Mr Peters has long held Mr Lee in the highest regard, saying on the latter's death that a meeting with the former oligarch who had turned Singapore from a sleepy fishing village into a 21st-century economic powerhouse was one of the most valuable a politician could have.

Another example is the Greens' Jeanette Fitzsimons' mentoring of Russell Norman when the pair became co-leaders of their party.

Of course, Mr Peters probably has a completely different take on the succession problem. Indeed, it is difficult to see him operating in any back-room or background capacity when he is the one usually leading the charge from the trenches.

However, he knows the party must stop being a cult of personality - or being seen as such - and which is totally dependent on him.

Otherwise, New Zealand First will not survive as an electoral force and his legacy will be all the poorer.

Although it was not glaringly obvious, there were signs at New Zealand First's annual convention last weekend that Mr Peters had been pondering what the party must do long before he departs the stage.

He called for a membership drive to make the party more robust ahead of his departure.

He warned that the party needed to raise much more money to fund its election campaign.

Until now New Zealand First has essentially relied on Mr Peters' travelling up and down the country on an endless circuit of Grey Power speaking engagements.

That was not enough for New Zealand First to achieve cut-through in an election campaign even with him still leading the party.

Not long ago, Mr Peters would have viewed social media as meaning late-night drinks with journalists from Parliament's press gallery.

He has now bowed to the exponentially increasing role of Twitter and so forth communicating to far more voters than street corner rallies.

Succession, however, also begs the ultimate question: who should lead? New Zealand First is hardly over-imbued with leadership talent.

The party's culture discourages behaviour which might upstage the incumbent.

As a small-town mayor Ron Mark could pass muster as a leader of a small party, but he falls a long way short in the charisma stakes.

He also wears his ambition a little too obviously. He may wake one morning to find a horse's head in his bed.

There has been past talk about John Tamihere, who had the ability to reach out to conservative working-class voters.

But by far the most attractive and safest option is former Labour Cabinet minister Shane Jones, a close friend of Mr Peters.

In terms of intellect, political nous and oratory, Mr Jones ticks all the boxes.

The question mark over Mr Jones is just how willing he would be to throw himself back into the political rough-and-tumble to the degree to which Mr Peters does to ensure the party keeps its head above water.