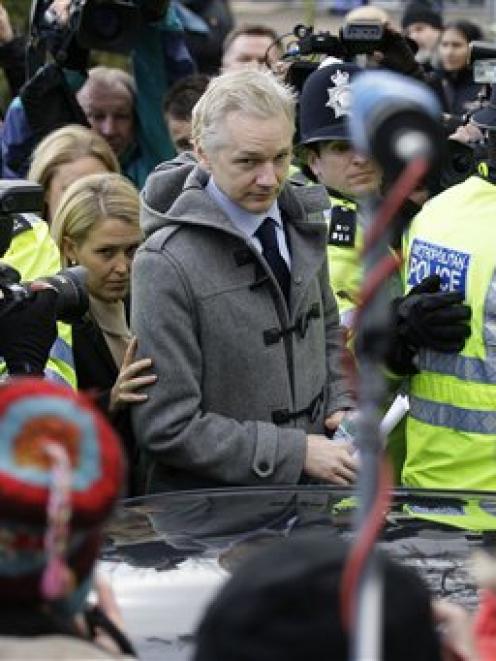 The founder of WikiLeaks Julian Assange after making a appearance at Belmarsh Magistrates' Court in London on January 11. (AP Photo/Sang Tan)
Leaked Swedish police documents on the Julian Assange sex cases raise key questions for both sides about the allegations.

Was one of the WikiLeaks founder's Swedish lovers asleep during intercourse? Did she consent to unprotected sex? Those answers will determine whether rape was committed under Swedish law.

The 39-year-old Australian denies any wrongdoing in separate encounters with two Swedish women last summer, and is fighting Swedish attempts to have him extradited from Britain to face questioning in the cases. He will appear in court in London on Monday and Tuesday in that extradition case.

In leaked police documents that emerged this week on the Internet, the Swedish woman accusing Assange of rape woke up as he was having sex with her, but let him continue even though she knew he wasn't wearing a condom.

She says she insisted that Assange wear a condom when they had sex in her apartment in the Swedish city of Enkoping on August 16, and that he reluctantly agreed. The incident labeled as rape happened the next morning, when the woman claims she was woken up by Assange having unprotected sex with her.

"She immediately asked: 'Are you wearing anything?' and he answered 'You,'" according to a police summary of her deposition. "She said to him 'You better don't have HIV' and he answered 'Of course not.' She felt it was too late. He was already inside her and she let him continue."

Having sex with a sleeping person can be considered rape in Sweden, but the details in the leaked transcript could explain why different prosecutors have made different assessments of the incident.

One Stockholm prosecutor threw out the rape case altogether. A more senior prosecutor later reinstated it, and asked for Assange's extradition from Britain so she could question him in the case.

It's unclear who leaked the police documents, some of which have been publicly released before but with key portions blocked out. It's also not clear which side the full police documents would help more.

"It is a complicating factor that this person when she wakes up in one way or another gives her consent," said Nils-Petter Ekdahl, a judge and expert on Sweden's sex crimes legislation. "Does the consent also apply to what happened when one was sleeping? This question has not been tested by the justice system."

"I can just say that I sent them to my client through his lawyer in London. But how it ended up on the Internet I don't know," Hurtig told The Associated Press. "It's incredibly unfortunate."

Assange is also accused of sexual molestation and unlawful coercion against another Swedish woman with whom he had sex in the same week. The leaked documents show she accuses him of deliberately damaging a condom during consensual sex, which he denies.

Assange met both women in connection with a seminar he gave on free speech in Stockholm after he and WikiLeaks made headlines around the world with the release of thousands of secret U.S. military documents on the war in Afghanistan.

His supporters say the allegations are trumped up and possibly politically motivated, charges that the women's lawyers have denied.

WikiLeaks has deeply angered the U.S. and other governments by publishing tens of thousands of secret military documents on the wars in Afghanistan and Iraq as well as a massive trove of U.S. diplomatic cables.