In the gravest assault on the symbol of American democracy in more than 200 years, rioters forced their way past metal security barricades, broke windows and scaled walls to fight their way into the Capitol.

Police said four people died during the chaos - one from gunshot wounds and three from medical emergencies - and 52 people were arrested. The FBI said it had disarmed two suspected explosive devices.

Some besieged the House of Representatives chamber while lawmakers were inside, banging on its doors and forcing suspension of the certification debate. Security officers piled furniture against the chamber's door and drew their pistols before helping lawmakers and others escape.

Hours later, both houses of Congress resumed their work on certifying Biden's Electoral College win, with debate stretching into the early hours of Thursday. It quickly became clear that objections from pro-Trump Republican lawmakers to Biden's victory in battleground states would be rejected overwhelmingly, including by most Republicans.

"To those who wreaked havoc in our Capitol today - you did not win," Vice President Mike Pence said as the session resumed. "Let's get back to work," he said, drawing applause.

"We will certify the winner of the 2020 election," Senate Republican leader Mitch McConnell added, calling the assault by Trump supporters a "failed insurrection." 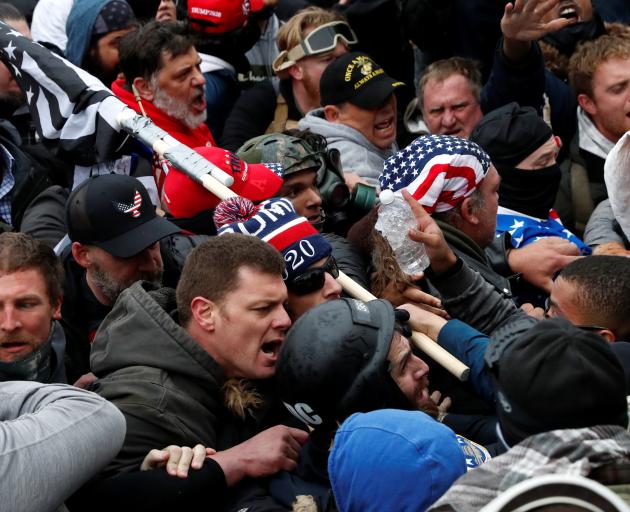 Pro-Trump protesters clash with Capitol police at a rally to contest the certification of the 2020 US presidential election results. Photo: Reuters
Lawmakers were debating a last-ditch effort by pro-Trump lawmakers to challenge the results, which was unlikely to succeed. But some who had planned to object said they would cut their effort short and perhaps only challenge the results in one state instead of multiple states.

"This is how election results are disputed in a banana republic — not our democratic republic. I am appalled by the reckless behavior of some political leaders since the election,” former President George W. Bush, a Republican, said in a statement, without mentioning Trump by name.

"Our nation, so long the beacon of light and hope for democracy, has come to such a dark moment."

Pres.-elect Joe Biden addresses the nation after a breach on the U.S. Capitol, saying "the work of the next four years must be the restoration of democracy." https://t.co/pzqI6Vs8Hp pic.twitter.com/HeILznGev3

It was the most damaging attack on the iconic building since the British army burned it in 1814, according to the U.S. Capitol Historical Society.

The chaotic scenes unfolded after Trump, who before the election refused to commit to a peaceful transfer of power if he lost, addressed thousands of supporters near the White House, repeating unfounded claims that the election was stolen from him due to widespread fraud and irregularities.

Trump told the supporters they should march on the Capitol to express their anger at the voting process and pressure their elected officials to reject the results, urging them "to fight."

Biden, a Democrat who defeated the Republican president in the Nov. 3 election and is due to take office on Jan. 20, said the activity of the protesters "borders on sedition."

'WE WILL NOT TAKE IT'

Trump had pressed Pence to throw out election results in states the president narrowly lost, although Pence has no authority to do so.

"Our country has had enough and we will not take it any more," Trump said at the rally.

The certification in Congress, normally a formality, had been expected to stretch for several hours as some Republican lawmakers mounted an effort to reject some state tallies, starting with Arizona.

Republicans and Democrats, who had been bitterly divided over that effort, both called on the Trump supporters to stand down.

"This is un-American and this has to stop," said House Republican leader Kevin McCarthy, a Trump ally who supported the Republican effort to challenge the results.

That attempt was unlikely to succeed, as even many Republicans opposed it. 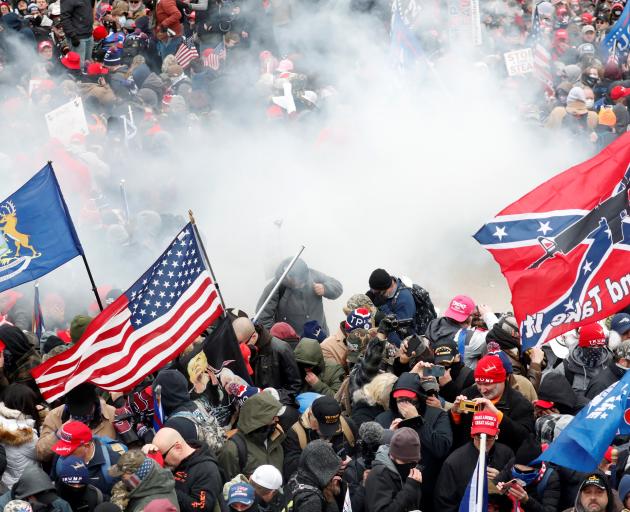 Tear gas is released into a crowd of protesters in Washington DC on Wednesday. Photo: Reuters

"If this election were overturned by mere allegations from the losing side, our democracy would enter a death spiral," said Senate Majority Leader Mitch McConnell, who helped give Trump some of his biggest accomplishments.

The violence unfolded on the same day that Trump's Republicans lost their majority in the Senate as they lost two runoff elections in Georgia.

"We will never give up," Trump earlier told thousands of cheering supporters on a grassy expanse near the White House called the Ellipse. "We will never concede. It doesn't happen."

Trump called on Pence to overturn the election results as he presided over the debate in Congress. "If you're not, I'm going to be very disappointed in you," Trump said.

The U.S. Constitution does not give Pence the power to unilaterally overturn the results of the election, and the vice president said in a statement he could not accept or reject electoral votes unilaterally.

The violence stunned world leaders. "Trump and his supporters must accept the decision of American voters at last and stop trampling on democracy," German Foreign Minister Heiko Maas said.

Business groups, normally staunch allies of Republicans in Washington, also reacted strongly. The National Association of Manufacturers said Pence should consider invoking a clause in the Constitution that allows a president to be removed from office when he is unable to do his job.

"This is sedition and should be treated as such," said the group's president, Jay Timmons.