Deadly day for NATO in Afghanistan 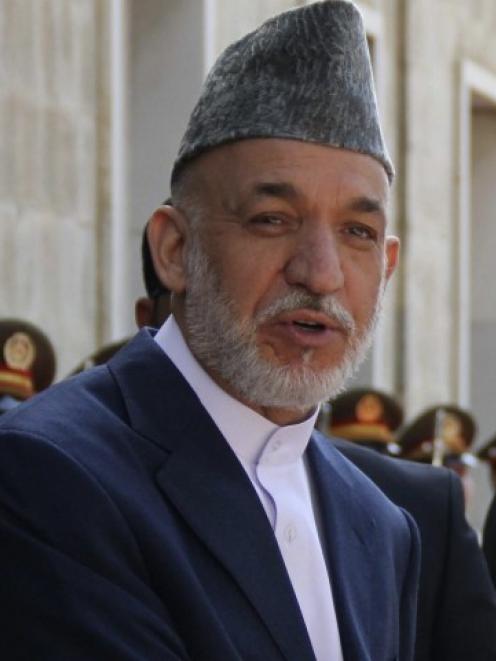 Afghanistan President Hamid Karzai. Photo Reuters
A gunman wearing an Afghan uniform turned his weapon against foreign trainers working for NATO in the western province of Herat, killing three, in a grim 24 hours for the coalition in which five NATO soldiers were also killed.

The latest rogue shooting by an Afghan in a police or army uniform happened at a regional training centre in the relatively peaceful western province near Afghanistan's border with Iran, which is normally patrolled by Italian forces.

"An individual wearing an Afghan National Security Force uniform turned his weapon against ISAF contracted civilian employees in western Afghanistan today, killing three," a spokesman for the NATO-led coalition said, adding that an unknown number of other people had been wounded.

"Also, one insurgent was killed in the engagement and we are still looking for one more shooter," he said.

Early Afghan media reports, which could not immediately be confirmed by Reuters, said the three dead contractors were all American citizens. Some reports put the death toll at four.

Four foreign soldiers were killed earlier on Sunday by improvised bombs in two incidents in the east and south, while another was killed in an insurgent attack in the volatile east late on Saturday.

So-called green on blue shootings, in which Afghan police or soldiers turn their guns on their Western mentors, have seriously eroded trust between the allies as NATO combat soldiers prepare to handover to Afghan forces by 2014, after which most foreign forces will leave the country.

According to NATO, there have been 20 green on blue attacks on foreign troops since January in which 27 people have been killed. Last year, there were 21 attacks in which 35 people were killed.

The latest attack is not technically considered to be the 21st green on blue attack this year as the victims were all contractors.

NATO commanders have downplayed most episodes as the work of disgruntled Afghan soldiers, rather than as evidence of Taliban infiltration of the security forces.

Earlier this month, an Afghan policeman opened fire on British soldiers in Helmand province, killing three in an attack claimed by the Taliban.

The latest attack happened at Camp Zafar, one of two camps where Afghan forces are trained, located eight kilometres (4.9 miles) south of the main NATO base in the province.

Camp Arena, the main Italian base near Herat City, the provincial headquarters, was locked down after the shooting while the search for the rogue shooter was conducted. The base is home to 2,000 Italian soldiers and 400 Spanish troops.

Agha Saqeb, the Herat police chief, told Reuters by telephone that the shooter, thought to have been in a police uniform, was from neighbouring Badghis province.

"He killed at least two foreign trainers at the police training centre. An Afghan interpreter was also injured in the attack," Saqeb said.

Violence in Afghanistan is at its fiercest since U.S.-led Afghan troops overthrew the Taliban government in 2001. Insurgents have extended their reach from traditional strongholds in southern and eastern areas to parts of the country once considered relatively safe.

In a separate incident, the Taliban executed five Afghan civilians kidnapped on Saturday who worked for NATO in Wardak province, close to the capital Kabul, a statement from the provincial governor given to Afghanistan's Tolo TV station said.

A sixth prisoner reportedly escaped to raise the alarm.

The bodies were found booby-trapped with explosives meant to kill or maim searchers, the statement said.

The killings followed the public execution of a woman several weeks ago for adultery, an act that prompted international outrage and led President Hamid Karzai to admit his government had been unable to deliver effective justice for many Afghans.