Peterson, at the time a Broward County deputy, was on duty as a school resource officer when a gunman entered the school building on February 14, 2018, and opened fire. He never went inside during the shooting and 17 people died and 17 others were wounded, according to the sheriff's office and surveillance video.

Nikolas Cruz, who was 19 at the time and previously had been expelled from the school, was charged with the murders. He is awaiting trial. 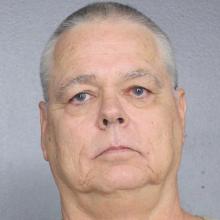 Former Broward County sheriff's deputy Scot Peterson Photo: Broward Sheriff's Office Jail via Reuters
Peterson also faces legal trouble in civil court. In May 2018, Andrew Pollack, whose daughter Meadow was killed in the shooting, filed a wrongful death lawsuit against Peterson. His son Hunter said on Twitter that he hoped Peterson spends the rest of his life in prison.

"He cowered in Parkland while my sister died defenceless and lied about his failure to confront the shooter," he said.

Peterson's lawyer in the civil lawsuit, Joseph DiRuzzo, did not respond to a request for comment.

Peterson was booked into the Broward County jail and his bond set at $102,000.

Broward County Sheriff Gregory Tony said on Tuesday he had fired Peterson and another deputy, Brian Miller, who he said neglected their duties during the shooting.

"We cannot fulfill our commitment to always protect the security and safety of our Broward County community without doing a thorough assessment of what went wrong that day," Tony said in a statement.

Peterson resigned a week after the shooting. But his and Miller's termination means they can no longer serve as law enforcement deputies for the Broward Sheriff’s Office, the sheriff said.

Peterson's arrest follows a 14-month investigation that included interviews of 184 witnesses into law enforcement's response during the shooting.

Some Broward County sheriff's deputies held back too long as shots were fired instead of rushing toward the gunfire, according to a 485-page report released in January 2019 by a state-appointed commission.

Seven deputies in all were under an internal sheriff's office investigation to determine if their actions complied with department standards, Tony said.

Senator Rick Scott, who was governor of Florida when the shooting happened, said it was time for justice to be served.

"Had this individual done his job, lives would have been saved. Actions (or inaction) have consequences," he said in a statement.

Three weeks after the shooting, Scott signed into law on Friday a bill imposing a 21-year-old legal age requirement and three-day waiting period on all gun purchases and allowing the arming of some school employees.