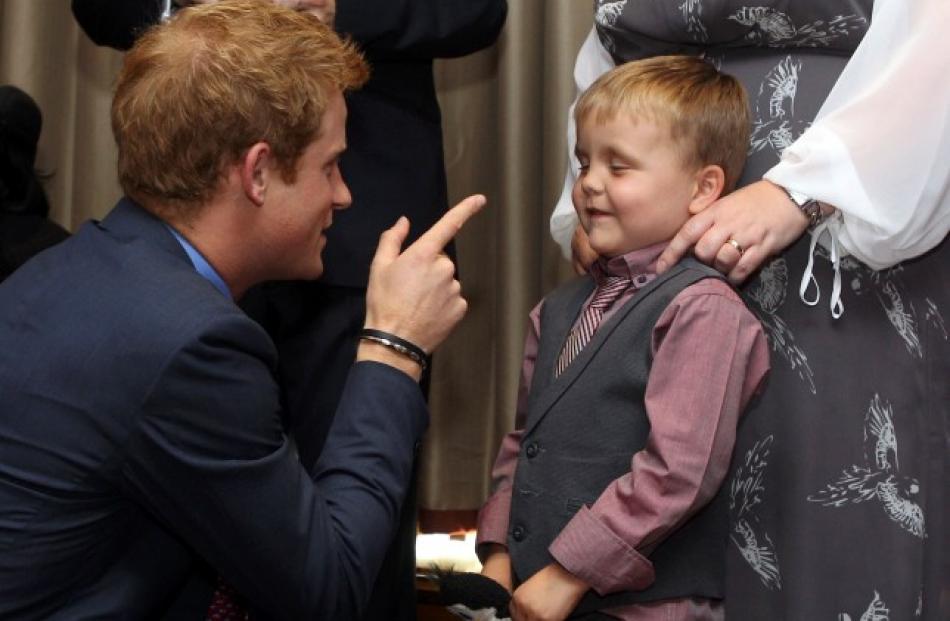 Prince Harry talks to 6-year-old Alex Logan as he attends the WellChild awards ceremony at the InterContinental Hotel in London. REUTERS/Lewis Whyld/Pool

The 27-year-old prince, third-in-line to the British throne, made news around the world two weeks ago when the pictures of him naked with a young woman in his hotel suite were printed in newspapers and on websites.

Giving a speech before handing out awards for the WellChild charity for seriously ill children for which he is a patron, Harry jokingly alluded to the incident as he paid tribute to the winners.

"All of you, children, families, nurses, doctors, carers, volunteers are quite frankly too remarkable for me adequately to describe with mere words," he said.

"But never one to be shy in coming forward, I'll give it a go," he added, before grinning knowingly as the audience burst into laughter and gave him a warm round of applause.

Earlier one of the children attending the awards, six-year-old Alex Logan, told ITV News that when he spoke to Queen Elizabeth's grandson he planned to say: "I'm glad you've got your clothes on Prince Harry."

But when they met, Harry gave him a smile, wagged his finger at him and warned him not to mention the incident.

"Harry said to Alex 'you keep looking up at your mum, looks like you're dying to say something but you know she will tell you off'," Logan's mother Debbie said.

"'I heard you were on ITV earlier, you said something cheeky, let's not talk about that here'."