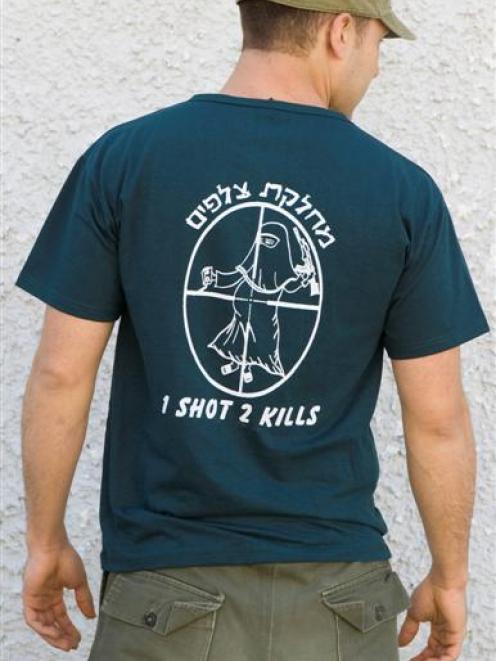 An Israeli model poses with a T-shirt with Hebrew that reads 'Sniper platoon'. (AP Photo/ Yanai Yechiel)
Israeli soldiers wore T-shirts with a pregnant woman in the cross-hairs of a rifle and the slogan "1 Shot 2 Kills," adding to a growing furore in the country over allegations of misconduct by troops during the Gaza war.

"The smaller they are, the harder it is," says another shirt showing a child in a gun sight. Soldiers wore the shirts to mark the end of basic training and other military courses. They were first reported by the Haaretz daily.

The shirts "are not in accordance with IDF values and are simply tasteless," the military said in a statement.

"This type of humour is unbecoming and should be condemned."

The army said it would not tolerate such behaviour and would take disciplinary action against the soldiers involved.

Haaretz showed pictures of five shirts and said they were made at the unit level - indicating that they were made for small numbers of troops, perhaps several dozen, at a time. It said they were worn by an unknown number of enlisted men in different units. The Tel Aviv factory that made many of the shirts, Adiv, refused to comment.

Few people in the Palestinian territories appeared to be aware of the T-shirts. In Gaza, Hamas spokesman Fawzi Barhoum said it "reflects the brutal mentality among the Zionist soldiers and the Zionist society."

Hamas-controlled media consistently glorify attacks on Israelis, and cartoons in Palestinian newspapers frequently use classic anti-Semitic images of Jews as hook-nosed, black-hatted, wily and unscrupulous characters out to rule the world and oppress Arabs.

The Islamic militant group's TV station ran a children's show in which a Mickey Mouse knockoff fulminated about Israel before it was killed by a purported Israeli agent. Hamas also mocked Israeli suffering over its attacks, staging a play about its capture of an Israeli soldier in which it makes fun of the serviceman crying for his mother and father.

Israel's military has come under increasing scrutiny after unidentified soldiers alleged that some troops opened fire hastily and killed Palestinian civilians during the Gaza war several months ago, including children, possibly because they believed they would not be held accountable under relaxed open-fire regulations. The military has ordered a criminal inquiry into soldiers accounts published in a military institute's newsletter.

"I tell you that this is a moral and ideological army. I have no doubt that exceptional events will be dealt with," Ashkenazi told new recruits. Gaza "is a complex atmosphere that includes civilians, and we took every measure possible to reduce harm to the innocent."

Hamas and other Palestinian militant groups fire rockets from heavily populated areas, and Israel says Hamas is to blame for the civilian deaths because it leaves the military no choice but to attack them there.

UN human rights experts said on Monday that Israeli soldiers used an 11-year-old Palestinian boy as a human shield during the Gaza offensive. The military ordered the boy on Jan 15 to walk in front of soldiers being fired on in a Gaza neighbourhood and enter buildings before them, said Radhika Coomaraswamy, the UN secretary-general's envoy for protecting children in armed conflict.

Uzi Dayan, a former Israeli deputy chief of staff, said he was "shocked but not surprised" by the T-shirts.

"I spent many years in the army and I know that if you don't pay attention all the time, these things can happen. These are very young people in a combat situation, so you need to have a finger on the pulse," he said.

American troops in Iraq and Afghanistan have also come under criticism for heavy civilian casualties in those wars.

The Israeli military misconduct allegations have struck a nerve in Israel where the military is expected to observe a higher moral standard.

"We have to face this challenge, not because we're the most moral army in the world, but because there are democratic norms and laws of war that we have to keep, and because we want to win and continue living in a democratic society," Dayan said.