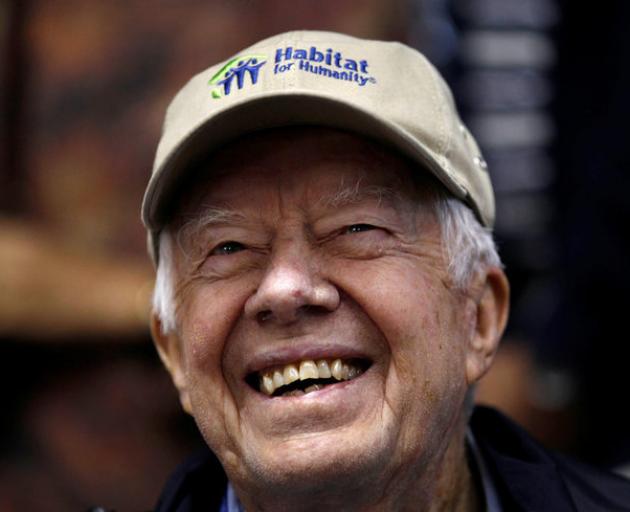 By Friday morning, former US President Jimmy Carter was smiling as he returned to the building site to help kick off the project's last day.

Former US President Jimmy Carter, appearing fully recovered from dehydration suffered while helping to build a home for charity in Canada, was released from an overnight hospital stay on Friday (local time) and addressed the project's closing ceremony.

Carter (92) collapsed while working on Thursday at the Winnipeg construction site for Habitat for Humanity, which promotes affordable home ownership, and was taken to St. Boniface General Hospital for medical treatment and tests.

By Friday morning, Carter was smiling as he returned to the building site to help kick off the project's last day.

Hours later, he and his wife, Rosalynn Carter (89) attended closing ceremonies at the Canadian Museum for Human Rights in Manitoba's capital, receiving a rousing ovation from the crowd.

Dressed in blue jeans, a T-shirt and light-weight jacket, a relaxed, fit-looking Carter climbed a short flight of steps to the stage to salute Habitat's members for their contributions.

"I look upon all the volunteers, in a very sincere way, as human rights heroes, and I thank you for it," he said, and joked that his "bringing attention to this Habitat project was completely unintentional."

The former first lady told the crowd her husband received a clean bill of health after an extensive battery of tests during his brief hospitalisation, including from one test designed to detect heart damage.

The results showed "there has never been any kind of damage at all to Jimmy Carter's heart," she said. "I knew he had a good heart."

Thursday's health scare generated an outpouring of support for Carter, a Democrat who served in the White House from January 1977 to January 1981 and has lived longer after his term in office than any other president in US history.

A high point of his presidency was Carter's role in brokering the 1978 Camp David Accords that ushered in peace between Israel and Egypt.

But having left office profoundly unpopular, he is widely regarded as a better former president than he was a president, and received the Nobel Peace Prize in 2002 for his humanitarian work.

Carter disclosed in August 2015 that he had been diagnosed with a form of skin cancer called melanoma that had spread to his brain and elsewhere and had been spotted during liver surgery.

But months later, Carter told the Maranatha Baptist Church, where he teaches Sunday school in his home town of Plains, Georgia, that his latest brain scan showed no sign of the disease.

Carter was in Canada for a project to build 150 new homes for needy families, celebrating the country's 150th independence anniversary.