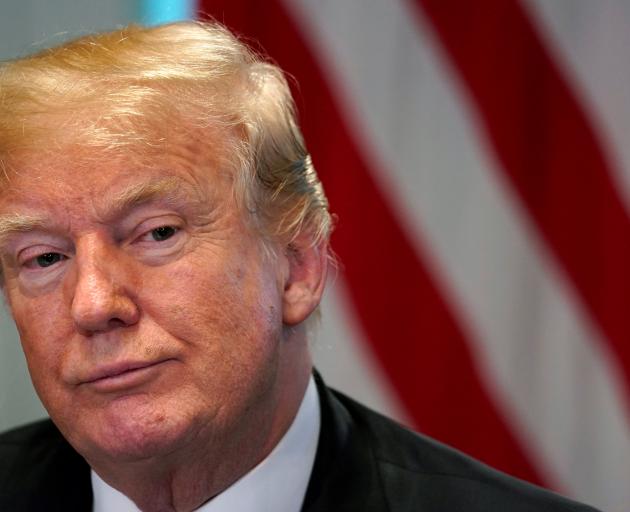 President Donald Trump dismissed the first Democratic debate as "BORING" on Wednesday (local time) night as he flew off to Japan, predicting that the 10 rivals on stage seeking to toss him from office in the 2020 election would do poorly.

The debate began at about the same time that Air Force One, carrying Trump and his entourage to Japan, stopped to refuel at Joint Base Elmendorf-Richardson in Anchorage, Alaska.

“There's a big debate going on; it just started," Trump told US troops at the base during the refuel. "I had my choice between you and them, and I chose you."

Asked by a reporter how he thought the Democrats would do during the debate, Trump said, "I think they’re all going to do very poorly."

Once he got back on the plane, he fired off a one-word tweet: "BORING."

Trump, a Republican, had suggested earlier in Washington that he might offer some tweeted responses to what he hears from the 10 Democratic presidential candidates on the stage in the first of back-to-back debate nights in Miami.

"Well, I’ll be on a plane," Trump said on Fox Business Network's "Mornings with Maria." "Yes everyone said I’ll be tweeting. I’ll actually be on a plane and it just seems very boring, but I’m going to watch it because I have to."

Trump, who has been a polarising, name-calling and often chaotic president, is publicly expressing confidence about his re-election prospects in 2020.

He heard chants of "four more years, four more years" in his appearance on Wednesday before the Faith and Freedom Coalition, an evangelical Christian group.

Privately, some advisers worry about his chances in several states he won in 2016, such as Michigan, Pennsylvania and Wisconsin.

There were some internal worries at the campaign in recent weeks that the job of Trump campaign manager Brad Parscale might be at risk after the leak of internal polling that showed Trump doing badly in several key states, a Trump adviser said.

Trump ultimately fired two of his three pollsters, which appeared to calm those worries for now, the adviser told Reuters.

He has now brought in $US36 million for Trump Victory since formally launching his campaign a week ago in Florida.

Trump advisers see former Vice President Joe Biden as Trump's biggest threat among the Democrats. Trump frequently gets in digs at Biden, who will debate on Thursday night.