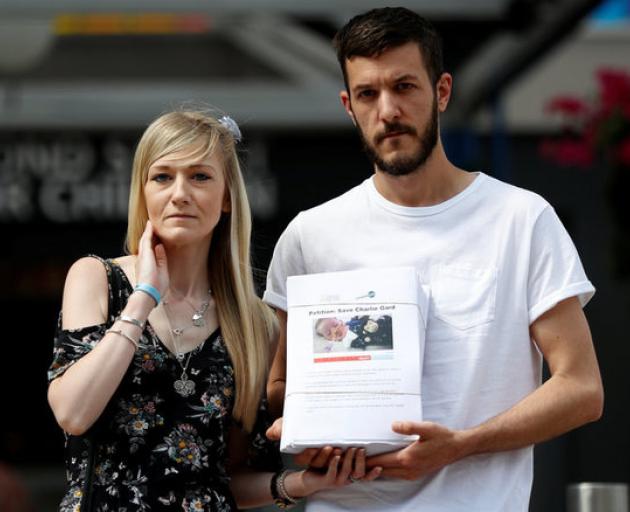 A US doctor offering experimental treatment to a critically ill British baby visited the London hospital where he is being treated on Monday (local time) as part of a last-ditch attempt to persuade a judge to keep the boy's life support switched on.

The parents of Charlie Gard, who has a rare genetic condition causing progressive muscle weakness and brain damage, have been fighting a legal battle to send him to the United States for the neurologist's experimental therapy.

But Britain's courts have refused permission on the grounds it would prolong his suffering without a realistic prospect of it helping the 11-month-old child. The case has gained global attention after interventions by US President Donald Trump and Pope Francis, who have both voiced support for Charlie. It has prompted a fierce debate around the world about medical ethics and whether the hospital treating the child or his parents should determine his fate.

The US doctor offering the treatment - Michio Hirano, a professor of neurology at New York's Columbia University Medical Center - visited London's world-renowned Great Ormond Street Hospital for Children (GOSH) to examine Charlie for the first time and to meet other medical experts involved in the case.

He has been given an honorary contract allowing him to see the boy and have full access to his medical records.

Hirano says the therapy he is developing could improve the condition of Charlie who suffers from a form of mitochondrial disease. He believes there is between an 11 and 56 percent chance the nucleoside therapy would improve the baby's muscular strength and that there is a "small but significant" chance it would also help brain functions.

Charlie's parents, Connie Yates and Chris Gard, have been trying to send their son to the United States to undergo Hirano's therapy. But GOSH says Charlie, who cannot breathe without a ventilator, has no quality of life and that his life support should be turned off.

London's High Court, the Court of Appeal and Britain's Supreme Court have backed the hospital, a decision also supported by the European Court of Human Rights.

But last week, the case returned to the High Court after the hospital asked for a new hearing to consider new evidence from Hirano.

The US neurologist said reports of brain scans suggested that Charlie had brain disorder rather than structural damage. He said the better muscular strength would also allow a better assessment of his brain condition.

"In my view my keeping Charlie on artificial ventilation will not cause significant harm because he does not seem to be in pain," he said.

However, Hirano had never seen Charlie and has had limited access to his medical records, so it was agreed he should come to Britain to examine him and discuss the case with doctors involved in his treatment and other independent medical specialists.

The findings of the meeting will be reported to Judge Nicholas Francis who is expected to make a final decision on July 25.