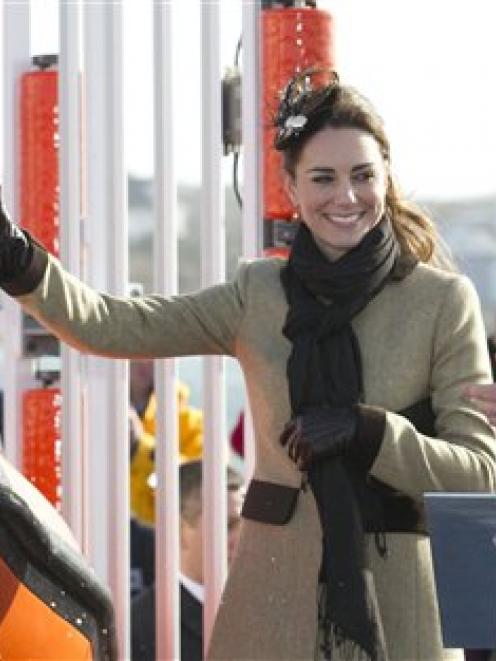 Middleton, with a big smile, poured champagne over the lifeboat after Prince William made a short statement asking that all those who used the boat be blessed.

The champagne bottle was not broken over the boat, as is traditional, because the lifeboat was an inflatable and it would not have been easy to crack the bottle on its bow.

Middleton looked elegant and comfortable in her new public role as a princess-to-be. She wore a three-quarter length fitted beige coat and had her long hair swept back. The look was topped by a chic feathery hat.

Prince William, a search and rescue helicopter pilot at a Royal Air Force base in Wales, stood by his fiancee as both chatted with local dignitaries and members of the public.

Jean Critchley, 63, said the wait was worth it for the chance to see the couple.

"They are a lovely couple. He is a great lad and she is a beautiful girl," she said after watching the event with her husband and grandson.

The visit had been highly anticipated because the couple have kept such a low profile since announcing their engagement in November, making only one other prior appearance at a charity event.

They plan to marry on April 29 at Westminster Abbey with just under 2,000 guests attending.

The couple will visit their alma mater, the University of St. Andrews in Scotland, on Friday.