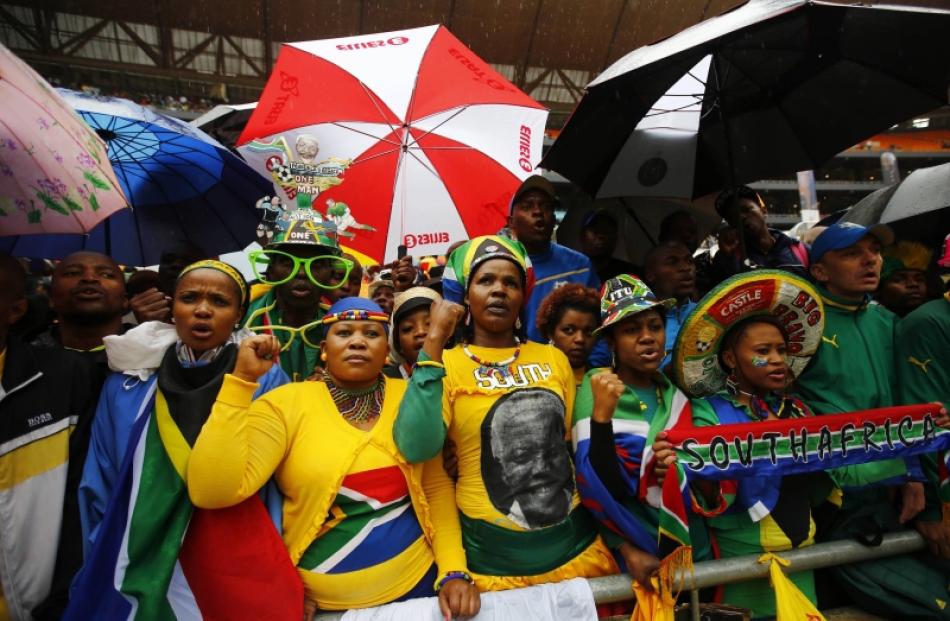 People sing and dance in heavy rain while waiting for the start of the official memorial service for late South African President Nelson Mandela at the First National Bank stadium, also known as Soccer City, in Johannesburg. Photo by Reuters

Nearly 90 leaders from across the world, some of them locked in enmity, are flying to South Africa for memorials to Nelson Mandela that will hail one of humanity's great peacemakers.

"The whole world is coming to South Africa," foreign ministry spokesman Clayson Monyela said, playing down concerns about logistics and security of such a large event organized at such short notice.

Iranian President Hassan Rouhani would also be there, Monyela said, raising the possibility of a first face-to-face meeting with Obama. However, Rouhani's name was not on an initial official list of attendees.

Israel, once an ally of the apartheid rulers who kept Mandela behind bars for 27 years, is sending neither its prime minister nor president, Israeli officials said.

Much of the logistical plan is based on South Africa's hosting of the 2010 soccer World Cup. Even though Pretoria refused to discuss Mandela's funeral arrangements before his death, it has been laying the preparations for years.

"We're obviously not starting from scratch in terms of organization," Monyela said. "We've got a system that kicks into play whenever you've got events of this magnitude."

Besides security, the memorial at the 95,000-seat stadium near Soweto presents officials with a diplomatic minefield - trying to avoid a chance standoff in the rest rooms, say, between Mugabe and Tony Blair, the former British prime minister whom he has denounced as a "little boy" and a "liar".

Those close to Madiba, the clan name by which Mandela was known, say he would have wanted handshakes, not head-butts.

"Tomorrow, people should all be honoring their relationship with Madiba. If it means shaking hands with the enemy, yes, I would like to see that," Zelda la Grange, his former personal assistant for more than a decade, told Reuters.

"That is what Nelson Mandela was and actually is - bringing people together despite their differences."

On the day, diplomacy is unlikely to detract from the outpouring of emotion expected at the seven-hour ceremony at the gigantic bowl-shaped Soccer City, a stadium steeped in Mandela history.

It was there that the Nobel peace prize winner made his last public appearance three years ago, waving to fans from the back of a golf cart at the World Cup final.

It was also there, 20 years earlier, that he addressed tens of thousands of supporters two days after his release from prison, eliciting a deafening roar from the crowd with a clenched fist raised to the sky and a single word: "Amandla", the Zulu and Xhosa word for power.

Since his death, South Africa has been gripped by mass emotions unrivalled since the day Mandela was freed from jail, and his victory in the first all-race elections four years later, in 1994.

On Sunday, worshippers filled churches, mosques, synagogues and community halls, offering praise and prayers for a man celebrated as "Father of the Nation" and a global beacon of integrity, rectitude and reconciliation.

Tributes flowed in from around the world and across political and religious divides.

Besides Obama, three former U.S. presidents - Jimmy Carter, Bill Clinton and George W. Bush - will also be in Johannesburg. Top hotels are struggling to deal with the avalanche of high-profile celebrity Mandela mourners.

"We're fully booked," said an employee of the five-star Saxon Hotel, Villas and Spa, which has 54 luxury rooms set in lush gardens. "We've even had to convert some treatment rooms to cope."

After Tuesday's event, Mandela's remains will lie in state for three days at the Union Buildings in Pretoria, where he was sworn in as president in 1994.

He will then be buried on Sunday, December 15, in Qunu, his ancestral home in the rolling, windswept hills of the Eastern Cape province, 700 km (450 miles) south of Johannesburg.

Only a few world leaders are due to attend the Qunu ceremony, which is likely to be a more intimate family affair.

As soon as President Jacob Zuma announced Mandela's death in a televised address to South Africa's 52 million people, the army cordoned off large parts of Qunu, while construction workers started work on a tiered gantry beside the cemetery.

Mandela's burial will be a mixture of military formality and Xhosa tradition, including elders from his abaThembu tribe.

In the same plot lie the remains of three of his six children: an infant daughter who died in 1948, a son, Thembi, who died in a car crash in 1969, and Makgatho, who died of an AIDS-related illness in 2005.