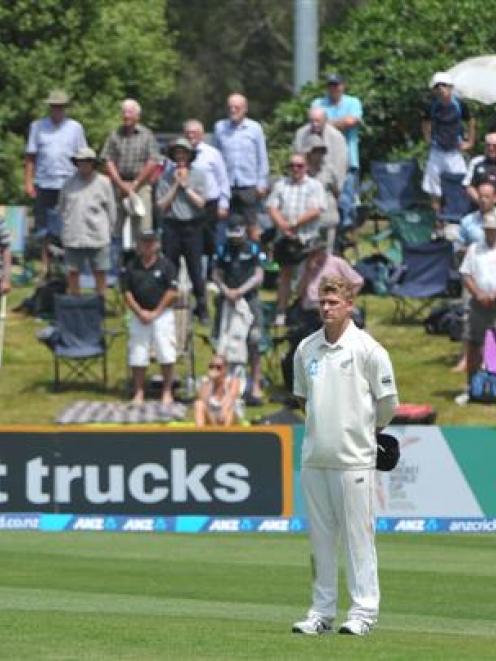 In a tribute to former South African president Nelson Mandela, New Zealand cricketer Corey Anderson and members of the crowd observe a minute's silence yesterday on day four of the first test match between New Zealand and the West Indies at the University Oval. Photo by Craig Baxter.
Nelson Mandela's death may unite South Africa for a time but a struggle within the African National Congress will follow over who will inherit his legacy, Prof Philip Nel, of the University of Otago, says.

''Now he is gone, who will we look up to?''Prof Nel, who headed the political science department at South Africa's University of Stellenbosch until 2002 when he moved to New Zealand, said while the country was prepared for the news, it would still trigger a period of mourning.

''We are all privileged to have known at least one truly great man in our lifetime.''

He regretted never meeting Mr Mandela in person but remembered the difference he made to South Africa, especially in the way he handled his release from captivity.

While Mr Mandela had always been treated as a special man in the black community, he gained the esteem of white South Africans as a result.

''He allayed the fears of right-wing groups and white South Africans.''

Mr Mandela was a ''wise, wise leader and there are not many around''.

''Without him things might have gone terribly wrong. We were on the verge of racial war.''

The mourning would lead to a feeling of national solidarity but a struggle over who inherited his legacy would follow, Prof Nel predicted. An election was scheduled for next year and Prof Nel did not believe the African National Congress (ANC) would win by a huge majority.

''In the medium term, three to five years, there will be some struggle in the ANC over who really has the power to interpret his legacy.''

Mr Mandela had been a unifying figure in the country and had defined the ANC, which was a ''broad church'' with left and middle-of-the-road members.

''I expect there will be rumbling of disunity.''

A civic memorial service for Mr Mandela will be held at St Paul's Cathedral next week. St Paul's Dean the Very Rev Dr Trevor James said the service would be for everyone in the city.

It was a combined effort between the church, Dunedin City Council and the University of Otago. A condolence book was also available to be signed in the cathedral.