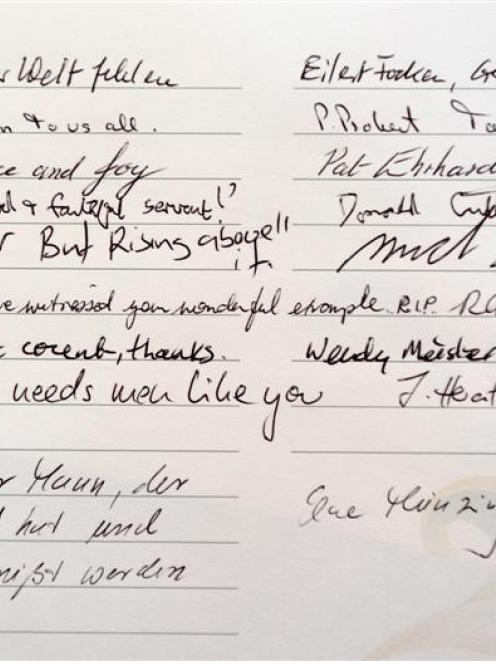 A page from Nelson Mandela's condolence book at St Paul's Cathedral yesterday. Photo by Gerard O'Brien.
''Thank you,'' most of the messages simply read. Tributes flowed in Dunedin yesterday for a man who changed the world.

Dozens of heartfelt messages were left in a condolence book within hours of it being placed in St Paul's Cathedral yesterday morning, following the death of South African statesman Nelson Mandela on Thursday.

The tributes were written in many different languages, reflecting the international appeal of the Nobel Peace Prize laureate.

''An inspiration to us all,'' another entry read.

The condolence book was an opportunity for Dunedin people to pay their respects to a man who made the world a better place, the Dean of St Paul's Cathedral, the Very Rev Dr Trevor James, said yesterday.

''We will not see a man like him again in our lifetime and it is important to do something to give people the opportunity to acknowledge him,'' Dr James said.

''If we failed to acknowledge him, we would have failed to learn from a man who has benefited us all. He changed the world and, in doing so, he helped to change us all,'' Dr James said.

The condolence book will be at the cathedral until Sunday, when it will be sent to the South African High Commission.

A civic memorial service for Mr Mandela will be held in St Paul's Cathedral at midday next Sunday.