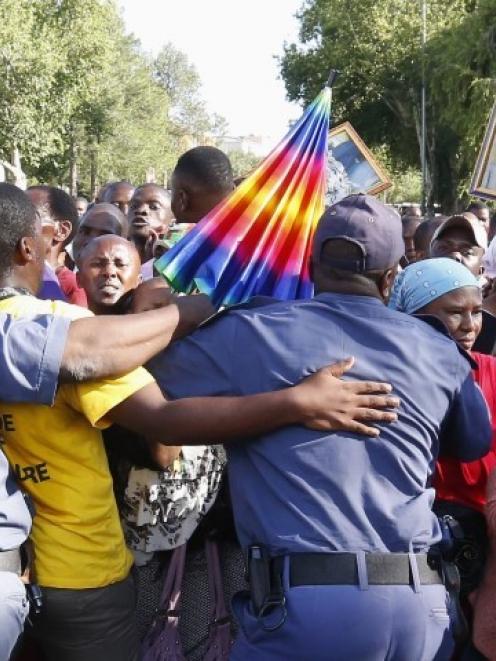 Mourners try to break through a police barrier attempt to view the body of former South African president Nelson Mandela lying in state in Pretoria. REUTERS/Yves Herman
Tens of thousands of mourners, some breaking through police barriers, flocked to South Africa's central government buildings to say a personal goodbye to anti-apartheid hero Nelson Mandela on the final day of his lying in state.

About 100,000 mourners had paid homage to the former president, a global symbol of reconciliation, over the course of the three days with more than 50,000 paying their respects on Friday, the government said in a statement.

Such was the crush of people wanting to see Mandela's body in the Union Buildings in the capital Pretoria, that the government had asked others to stay away from the park-and-ride facilities set up to take mourners to the area.

There were moments of tension as police turned people away.

At the Pretoria Showgrounds, one of the park-and-ride points, the crowd broke through the metal entrance gate when officers tried to stop people coming through. Some fell to the ground and hundreds streamed past before order was restored.

On another access road, police had to force back people trying to break through crowd barriers.

The day ended without further incident as the body of South Africa's first black president, who died last week aged 95, was moved by police motorcade back to the country's main military hospital for a final night.

On Saturday, his body will be flown to the Eastern Cape province for a funeral on Sunday at his ancestral home in Qunu, 700 km (450 miles) south of Johannesburg.

The arrival of an army of reporters, photographers and television crews for Sunday's funeral has created a security nightmare for South African authorities - and the chance to make a quick buck for enterprising locals.

In Pretoria, many people expressed disappointment at being prevented from filing past his casket.

"I am really angry, we tried for two days now to see Mr Mandela and thank him for changing this country and bringing us together. Now we have to go home with heavy hearts," said Ilse Steyn of Pretoria.

Winding queues had snaked for kilometres (miles) from the government site perched on a hill overlooking the city, well into the heart of the capital.

"I don't mind waiting, today is the last day and I must say thank you. I am who I am and where I am because of this man," said Johannesburg resident Elsie Nkuna, who said she had taken two days off work to see Mandela.

Filing past the coffin, some pausing to bow, mourners viewed the body laid out in a green and gold batik shirt, a style that he wore and had made famous. His face was visible.

On Friday, his grandchild Mandla sat beside the coffin, acknowledging mourners with smiles.

In the heat of the South African summer, army chaplains and medics handed out bottles of water and sachets of tissues.

Some people had been queuing since Thursday.

"We were hungry and thirsty and did not have money for food. The thought that I must be here to pay respect kept me going," said Leena Mazubiko, who had travelled from eastern Mpumalanga province.

"The police stormed the venue and broke up the memorial and everyone was told to go home," said Lucky Lukhele, the spokesman for the Johannesburg-based Swaziland Solidarity Network. Swazi police could not be reached for comment.

The week of mourning since Mandela's death on Dec. 5 has seen an unrivalled outpouring of emotion for the statesman and Nobel peace laureate, who was honoured by a host of world leaders at a memorial service in Johannesburg on Tuesday.

But the homage to Mandela has not been without controversy.

South African President Jacob Zuma, who is leading the national mourning ceremonies, was booed by a hostile crowd at Tuesday's memorial, a worrying sign for the ruling African National Congress (ANC) six months before elections.

There has also been a storm of outrage and questions over a sign-language interpreter accused of miming nonsense at the same memorial. The signer has defended himself, saying he suffered a schizophrenic episode.

Compared to Tuesday's mass memorial, Sunday's state funeral at Qunu will be a smaller affair focusing on the family, but dignitaries, including Britain's Prince Charles and a small group of African and Caribbean leaders, will also attend.

Iranian Vice President Mohammad Shariatmadari will also be at Qunu, but former U.S. President Bill Clinton, who had been expected at the funeral, will not attend, a South African foreign ministry spokesman said.

From the United States, civil rights activist Jessie Jackson was on the list to attend the funeral.