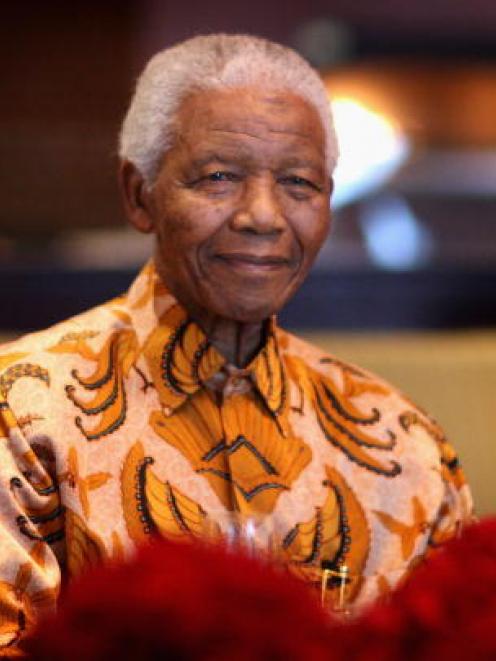 Nelson Mandela attends a lunch to benefit the Mandela Children's Foundation in Cape Town in this 2009 file photo. Photo Getty Images
South Africans united in mourning for Nelson Mandela on Friday, but some feared the anti-apartheid hero's death could leave their country vulnerable again to racial and social tensions that he did so much to pacify.

As dawn broke and commuters headed to work, many expressed shock at the passing of a man who was a global symbol of reconciliation and peaceful co-existence.

South Africans heard President Jacob Zuma tell them late on Thursday (local time) that the former president and Nobel Peace Prize laureate passed away peacefully at his Johannesburg home in the company of his family after a long illness.

Despite reassurances from leaders and public figures that Mandela's passing, while sorrowful, would not halt South Africa's advance away from its bitter apartheid past, some still expressed a sense of unease about the physical absence of a man famed as a peacemaker.

"It's not going to be good, hey! I think it's going to become a more racist country. People will turn on each other and chase foreigners away," said Sharon Qubeka, 28, a secretary from Tembisa township as she headed to work in Johannesburg.

"Mandela was the only one who kept things together," she said.

Flags flew at half mast as South Africa entered a period of mourning leading up to a planned state funeral next week.

Many attended church services, including another veteran anti-apartheid campaigner, former Archbishop of Cape Town Desmond Tutu. He said that like all South Africans he was "devastated" by Mandela's death.

"Let us give him the gift of a South Africa united, one," Tutu said, holding a mass in Cape Town's Anglican St George's Cathedral.

In a sign that business would largely go on as usual, the Johannesburg Stock Exchange said it would pause trade for only five minutes at 11am on Friday to mark Mandela's passing.

An avalanche of tributes continued to pour in for Mandela, who had been ailing for nearly a year with a recurring lung illness dating back to the 27 years he spent in apartheid jails, including the notorious Robben Island penal colony.

U.S. President Barack Obama and British Prime Minister David Cameron were among world leaders and dignitaries who paid fulsome tribute to him as a moral giant and exemplary beacon for the world.

American talk show host Oprah Winfrey added her voice to the tributes, saying Mandela "will always be my hero".

But for South Africa, the loss of its most beloved leader comes at a time when the nation, which basked in global goodwill after apartheid ended, has been experiencing bloody labour unrest, growing protests against poor services, poverty, crime and unemployment and corruption scandals tainting Zuma's rule.

Many saw today's South Africa - the African continent's biggest economy but also one of the world's most unequal - still distant from being the "Rainbow Nation" ideal of social peace and shared prosperity that Mandela had proclaimed on his triumphant release from prison in 1990.

"I feel like I lost my father, someone who would look out for me. Already as a black person with no connections you are disadvantaged," said Joseph Nkosi, 36, a security guard from Alexandra township in Johannesburg.

Referring to Mandela by his clan name, he added: "Now without Madiba I feel like I don't have a chance. The rich will get richer and simply forget about us. The poor don't matter to them. Look at our politicians, they are nothing like Madiba."

'LIFE WILL CARRY ON'

Just hours after the news of Mandela's death, Tutu had sought to assuage fears that the absence of South Africa's first black president, who steered the country to democracy, might revive some of the violent ghosts of apartheid.

"To suggest that South Africa might go up in flames - as some have predicted - is to discredit South Africans and Madiba's legacy," Tutu said in a statement on Thursday.

"The sun will rise tomorrow, and the next day and the next ... It may not appear as bright as yesterday, but life will carry on," Tutu said.

Zuma and his ruling African National Congress face presidential and legislative elections next year which are expected to reveal widespread discontent among voters about persisting poverty and unemployment two decades after the end of apartheid.

But the former liberation movement is expected to maintain its predominance in South African politics.

"It is painful losing him but the ANC is going to stay strong and be dominant. The party is powerful and will stay in power," said office worker Tumi Matshidiso, 27.

Mark Rosenberg, Senior Africa Analyst at the Eurasia Group, said that while Mandela's death might even give the ANC a sympathy-driven boost for elections due next year, it would hurt the party in the long term.

He saw Mandela's absence "sapping the party's historical legitimacy and encouraging rejection by voters who believe the ANC has failed to deliver on its economic promises and become mired in corruption."

Although Zuma's initial announcement of Mandela's death left the country hushed, later a crowd gathered overnight outside Mandela's old house in Vilakazi Street, Soweto, to sing songs in his praise.

"Mandela you brought us peace" was one of the songs.

Mandela rose from rural obscurity to challenge the might of white minority rule - a struggle that gave the 20th century one of its most respected and loved figures.

He was among the first to advocate armed resistance to apartheid in 1960 but was quick to preach reconciliation and forgiveness when the country's white minority began easing its grip on power 30 years later.

He was elected president in landmark all-race elections in 1994 after helping to steer the racially divided country towards reconciliation and away from civil war.

"His greatest legacy is that we are basically at peace with each other," F.W. de Klerk, the white Afrikaner president who released Mandela in 1990, told the BBC in an interview.

Mandela was awarded the Nobel Peace Prize in 1993, an honour he shared with de Klerk. Reacting to his death, the Nobel Committee said Mandela would remain one of the greatest laureates in the history of the prize.

In 1999, Mandela handed over power to younger leaders better equipped to manage a modern economy - a rare voluntary departure from power cited as an example to African leaders.

This made him an exception on a continent with a bloody history of long-serving autocrats and violent coups.