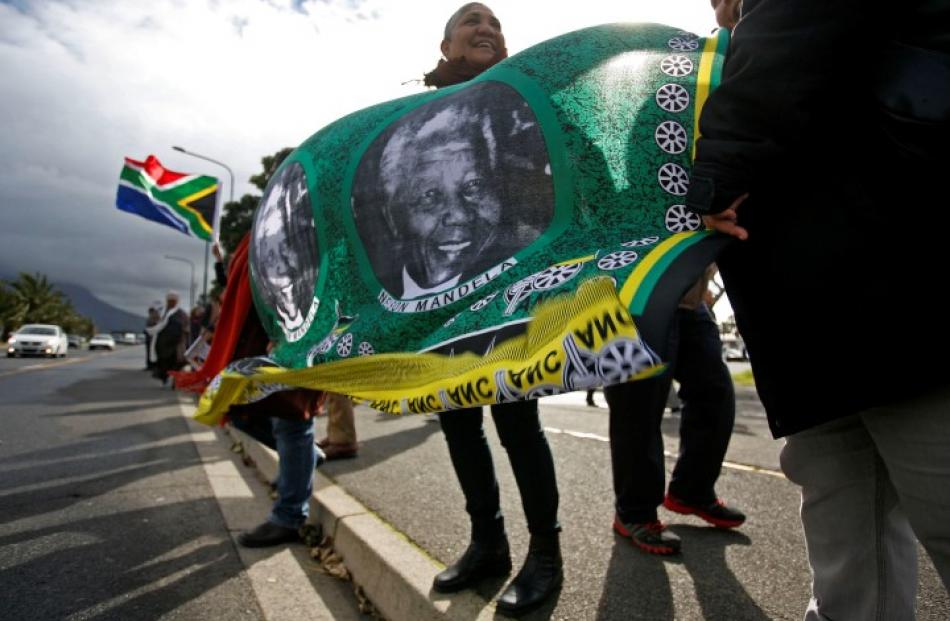 People hold a banner bearing the face of former South African president Nelson Mandela as they form a human chain in celebration of his 95th birthday in Athlone, Cape Town. REUTERS/Mark Wessels

South Africa and the world showered tributes on Nelson Mandela as the anti-apartheid leader turned 95 in hospital and his doctors reported he was "steadily improving" from a six-week lung infection.

The country has been on edge since the former president and father of the multi-racial 'Rainbow Nation' established at the end of apartheid in 1994 was admitted to hospital on June 8 with recurring lung problems that kept him in a critical condition.

It was his fourth stay in hospital in six months and has reminded South Africans that the man who is globally admired as a moral beacon against injustice and a symbol of racial reconciliation will not be with them forever.

But the mood was of celebration on Thursday as thousands of South Africans sang "Happy Birthday" and took part in charitable initiatives in a global outpouring of support for the Nobel Peace Prize laureate on U.N.-designated 'Nelson Mandela Day'.

At a United Nations event in New York marking the day, U.N. Secretary-General Ban Ki-moon hailed Mandela as "a giant of our times".

Throughout the day, crowds of well-wishers outside the Pretoria hospital where the retired statesman is being treated sang "Happy Birthday, Madiba" - using Mandela's traditional clan name - brought cakes and birthday cards and danced.

"Thank you for all that you have done for this country," said one well-wisher, Margaret Chechie.

Many South Africans also commemorated the birthday with 67 minutes of public service to honour the 67 years Mandela served humanity by first fighting against white-minority rule and then consolidating racial harmony when he was president.

As part of the public service initiative, office workers, students, soldiers and ordinary citizens spruced up orphanages, painted walls at schools and delivered food to the poor.

President Jacob Zuma visited Mandela at the hospital and said he was making steady progress. "I was able to say 'Happy Birthday' to him and he was able to smile," he told reporters.

Mandela's victory in the first multiracial elections in 1994 put an end to the apartheid system. Four years earlier, he was released from 27 years spent in prison under white minority rule, 18 of them at the notorious Robben Island penal colony.

His former wife Winnie Madikizela-Mandela called the 95th birthday "a gift to the nation".

Family members had lunch together at the hospital where the revered patriarch is being treated and his daughter Zindzi said they gave him a collage of family photographs for a present.

"Tata (our father) is making this remarkable progress and we look forward to having him back home soon," Zindzi said.

Mandela Day celebrations in the United States included a special event at U.N. headquarters in New York, where figures such as former U.S. President Bill Clinton and the Reverend Jesse Jackson added their voices to the global tributes.

"Mandela walked out of prison after 27 years a greater man than he went in," Clinton said. "Though he is old and frail and fighting for his life ... what is in his heart still glows in his smile and lights up the room through his eyes."

In South Africa, Ethiopian and Nigerian asylum seekers who had settled there fleeing persecution and conflict in their own countries cleaned streets in Johannesburg expressed their praise for the personality considered "a father of Africa".

"In this country, Mandela is the reason all of us blacks are free, so that's why we love him as the first citizen," said Kennedy Uzondu, 30, a Nigerian trader in South Africa.

Despite the adulation on his birthday, Mandela's post-apartheid 'Rainbow Nation' has not fulfilled all expectations.

Enormous gaps still persist in income, employment and access to education and these inequalities largely follow racial lines, according to the government's own data. White households in 2012 earn on average about six times more than black households.

Nevertheless, quality education and employment opportunities have also been opened up to tens of thousands of blacks.