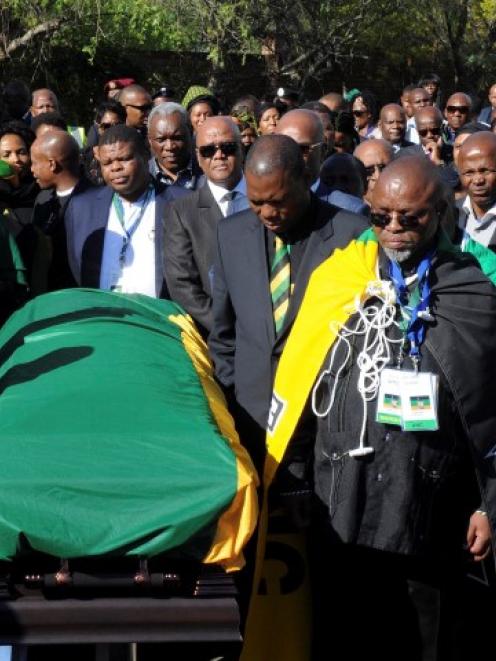 Delegates from the African National Congress transport the coffin of Nelson Mandela at his home in the village of Qunu, Eastern Cape as Mandela's grandson Mandla (R) looks on. REUTERS/Elmond Jiyane/GCIS
The body of Nelson Mandela has arrived at his ancestral home in the rolling hills of South Africa's Eastern Cape and was greeted by singing, dancing locals ahead of the anti-apartheid leader's state funeral set for the following day.

As the hearse bearing the remains of South Africa's first black president appeared on the horizon, crowds by the road broke into "Nkosi Sikelel' iAfrika" (God Bless Africa), the evocative national anthem adopted after the end of apartheid in 1994.

"I'm so excited and at the same time I'm so hurt because I'm seeing him for the last time," said grandmother Victoria Ntsingo, as military helicopters escorting the cortege clattered overhead.

"After his long life and illness he can now rest. Madiba is home. His work is done," she said, referring to Mandela by his clan name.

Mandela, who died on Dec. 5 aged 95, will be buried in his family homestead on Sunday after a state funeral combining military pomp and the traditional rites of his Xhosa abaThembu clan.

It will be the final act in ten days of mourning for the 'Father of the Nation', who suffered 27 years in prison before emerging to preach forgiveness and reconciliation in the quest to build a multi-racial democracy from the ashes of apartheid.

But in a sign of tensions in South Africa's complicated post-apartheid social fabric, there were suggestions that the peace prevailing in Qunu, a hamlet of a few hundred houses 700 km (450 miles) south of Johannesburg, was not replicated across the nation of 53 million.

Retired Archbishop Desmond Tutu, a leading light of 'The Struggle' while Mandela was in prison, said he had not been invited to the funeral of "Tata", the Xhosa word for father by which Mandela is affectionately known.

"Much as I would have loved to attend the service to say a final farewell to someone I loved and treasured, it would have been disrespectful to Tata to gatecrash what was billed as a private family funeral," Tutu said in a statement.

"Had I or my office been informed that I would be welcome there is no way on earth that I would have missed it," said Tutu, whose testy relationship with the ruling African National Congress (ANC) has soured in the last decade.

Presidency Minister Collins Chabane confirmed that no specific invitation was sent to Tutu, but said the accreditation he had used at an earlier memorial on Tuesday would have allowed him in principle to attend the Qunu event.

"We would like to reiterate that anyone wanting to attend the funeral service is welcome to do so," Chabane said.

Earlier on Saturday, the ANC, the 101-year-old former liberation movement to which Mandela dedicated his life, bid its own farewell in a rousing ceremony at a Pretoria military air base.

With revolutionary songs, clenched fists and cries of "Amandla" (Power) in honour of "Comrade Mandela", it was the most overtly political of all the ceremonies since Mandela's death.

"Go well Tata, you have played your part," President Jacob Zuma said in a eulogy that recalled Mandela's life as a fighter in the armed struggle for freedom as well his later, more widely recognised role as unifier and nation-builder.

"We will always remember you," he said, before leading the packed hall in spirited renditions of anti-apartheid anthems.

After the ANC send-off, Mandela's body was flown by military transport plane, escorted by two fighter jets, to Mthatha, the nearest airport to Qunu. Thousands lined the streets as the hearse proceeded through the town.

Mandela's widow, Graca Machel, and his former wife, Winnie Madikizela-Mandela, followed the cortege, looking drained and emotional after nine days of memorials in Johannesburg and Pretoria.

The rites included three days of lying in state at the Union Buildings in Pretoria, at which more than 100,000 people queued for hours to say a last goodbye.

One of Mandela's grandchildren, Mandla, thanked those who had come.

The Air Force is expected to stage a fly-past, followed by three military helicopters with giant South African flags in tow, an echo of the historic scenes nearly two decades ago when Mandela was sworn in as president.

At a mass memorial in Johannesburg on Tuesday, Zuma was subjected to a humiliating barrage of boos and jeers from the crowd, a worrying sign for the ruling party six months before elections.

Although it is widely expected to win, the ANC is losing support even among South Africa's black majority because of its perceived inability to tackle chronic poverty and joblessness.

Africa's biggest economy has enjoyed strong growth since the end of apartheid, but unemployment has remained above 25 percent and it remains one of the world's most unequal societies, with the average white household earning six times more than the average black one.

Besides the booing of Zuma, there has also been a storm of outrage over a sign-language interpreter accused of miming nonsense at the Johannesburg memorial. The signer has defended himself, saying he suffered a schizophrenic attack.

In Qunu too, there were also a few dissenting voices, mainly from those disappointed at being excluded from the funeral of man who to them was a local leader first, and a world leader second.

"Tata Mandela is a man of the people. When he was alive we used to go to his compound. Whatever was going on, we used to go in the compound and it was never a problem for the people of Qunu," said resident Malibonwe Gamakhulu.

"And today he is dead and we are being pushed out."